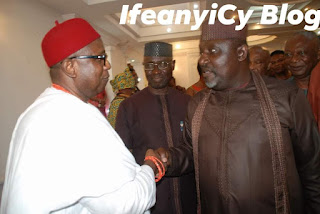 According to information made available to IfeanyiCy blog, His Royal Highness, Eze Cletus Ilomuanya aboard Air Peace flight to Abuja this morning accosted Senator Rochas Okorocha, former Governor of Imo State sitting next to him, exploded with so much rage and royal anger. What started as a mellow drama, all of a sudden snowballed into a full fledged confrontation inside the aircraft, as the popular Royal father descended on the former governor Okorocha with his walking stick..

According to sources, "If not the timely intervention of the flight Captain who rushed out when Ilomuanya was hitting Okorocha with his Royal walking stick to leave his sight, the story would have been something else."

The embattled former Governor was visibily rattled and shaken to his bone marrow. Okorocha was hastily relocated to another seat even as Eze Ilomuanya was heard warning him to stay away from Orlu if he truly wants peace to reign."

Okorocha you could recall dethroned His Royal Highness Eze Ilomuanya, the Obi of Obinugwu and Chairman Imo State Council of Traditional Rulers during his time as Governor. The ugly story went so bad that the ruling of Federal High Court, Appeal Court and Supreme Court to reinstall Eze Ilomuanya was entirely ignored by then Governor Rochas Okorocha until his tenure expired on May 29, 2019.