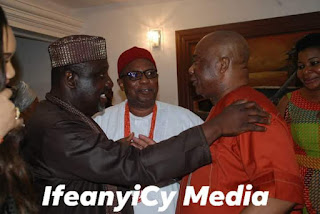 Former Governor of Imo State, Owelle Rochas Okorocha and Senator representing Imo West Senatorial District in the National Assembly, had reacted to the trending news of his assault and attack by His Royal Highness Eze Cletus Ilomuanya aboard Air Peace flight to Abuja this morning from Owerri.

"If Senator Okorocha had seen his brother llomuanya and chose to sit close to him , that action should be highly commended and applauded.
It showed that Okorocha had behaved not only as a Christian,  but as a Statesman . lt showed  that he had nothing personal against llomuanya.

And if llomuanya had paid Okorocha back or had negatively reacted to such kind gestures ,  by "accosting Okorocha and exploding with so much rage and royal anger", one would not be wrong to describe  such attitudes  as disgraceful, unfortunate, condemnable , embarrassing, ungodly, indecent and unexpected from someone who had led the lmo State Council of Traditional Rulers.

ln other words, he had showed he was not a good Ambassador of the state

Part of the report or story was also that llomuanya, "confronted Okorocha and also  descended on Okorocha with his walking stick...and Okorocha hastily relocated to another seat ".

Again, if  llomuanya could confront Okorocha to the  extent of hitting Okorocha with his walking stick and Okorocha not retaliating, but hastily relocated to another seat, we would only say that, Okorocha had acquitted himself very well as a two term former of lmo state,  now a sitting Senator and a worthy Ambassador of the state and the nation. He had shown character worthy of emulation .

And while llomuanya's actions,  could again  be described as disgraceful, unfortunate, regrettable and thuggery on Air. And should be condemned by all men and women of decency.

The whole scenario had,  once more , confirmed Okorocha's peaceful dispositions. His penchant or love  for peace . His principle of live and let others  live. And that was why,  as lmo Governor for 8 years,  he never had any personal confrontation with any one . He never  chased or pursued or chastised his critics.  Rather, he loved them .

We are also  aware or not unmindful of the fact that,  those who want appointments in the camphope government in the state or those who want to be reinstated as traditional rulers or those who want to return as chairmen of the state council of Traditional Rulers,  have told themselves that the easiest way or method to adopt to achieve their aims or ambitions,  would be to insult or attack Okorocha, leveraging on the hostility of the government in the state now ,  against Okorocha and his family.  But time is of great essence in human endeavours. ln other words, time will tell", he concluded.

Okorocha we could recall dethroned His Royal Highness Eze Ilomuanya as traditional ruler of Obinugwu in Orlu LGA as well as removed him as Chairman Imo State Council of Traditional Rulers during his tenure as Governor of Imo State, irrespective of courts pronouncements.