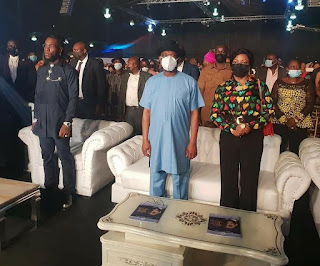 River State Governor, Barr Nyesom Wike had yesterday during the Home Coming of Burna Boy, gift ten million naira (N10, 000,000 ) to each of River State and Niger Delta Artistes and Comedians who were engaged by the ministry of art, culture and tourism to perform at the Home Coming reception packaged by the State in honor of their worthy son, who won Grammy Award.

Governor Wike who bestowed the 2nd highest award in Rivers State to Burna Boy before his parents, said the 10m support to those artistes that performed is different from their agreement or arrangement with the organisers.

Wike said, in appreciation of Burna Boy's glory and to encourage him to be coming home and looking inwards to help grow local talents, the state government donate land at Old GRA for him to build his own residential home , as the state will provide money for the building and furnishing.

Overwhelmingly excited, global music sensation, Burna Boy, thanked Governor Wike and Rivers State people for the honor bestowed on him which he described as the highest coming from his home state and people.