Those destroying Imo State Today Should Prepare for Hardship tomorrow. 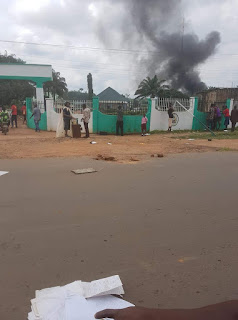 I am pained by the level of destruction of police stations going on across Imo state. More than 10 police stations across the 27 LGAs of Imo State have been set ablaze. Criminal suspects, kidnappers, armed bandits under police cells across the police commands affected were set free. The ugly incident will in days, weeks and months to come make the state unhabitable for living as life and properties will be under the mercy of men of the underworld.

More worrisome is the burning of Orlu LGA and Ehime-Mbano LGA secretariats, burning of INEC Office at Ehime-Mbano LGA, among other heinous crimes against private and public properties belonging to Imo and Nigeria and government.

The perpetrators of this arson forgot the fact that such ugly development will compound the hardships faced by Imo citizens, as government will use lean resources that could have been used in building road construction, rehabilitation of health centres, primary and secondary schools and other public utilities to reconstruct damaged properties belonging to Nigeria police force units and Local government councils affected.

I, therefore urge Youth leaders, Community leaders, Religious leaders, Political leaders, Women leaders, Traditional leaders and Stakeholders in the Imo project to rise up to the challenge and stop the unwarranted destruction of public facilities in Imo State. Imo belongs to us all.

Those carrying out this unlawful activities who many may have referred to as "hoodlums, thugs and arsonists" are first and foremost Imo Youths, there is no baptism of name that denied the obvious facts, they were not imported, they live here and suffer the pains of bad leadership and governance with us. There is no justification of the ongoing destruction of public properties in Imo State. Those who are of the opinion that the irate youths are sympathetic to the ugly carnage perpetrated by the military at Lekki Toll gate Lagos State should ask themselves if 19 States in the Northern Nigeria, Cross River State and other peaceful states were order and law is maintained are not part of Nigeria?

Having condemned earlier the evil and wicked activities of few bag eggs in the Nigeria Police force necessitating the #EndSARSProtest, I plead once more for our youths to apply restraint. Two wrongs can't make a right. Wisdom is profitable!!!

It's important also that I call on the promoters of Imo #EndSARS protesters to please use the instrument of mass media to appeal to the conscience of those destroying our common heritage who were said to be sympathetic to the #EndSARSProtest.