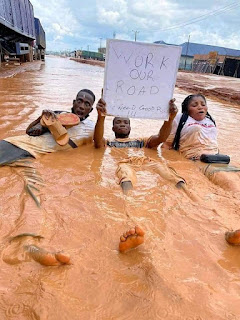 I woke up this morning shading tears after touring Imo communities yesterday. If you have the opportunity of moving around the 27 Imo LGA's and witness first hand the level of road decay across Imo communities, coupled with the fact that there is no single motorable road in Owerri capital city, dilapidated primary healthcares across the Imo community, non-habitable and non-equipped primary and secondary schools across Imo community, lack of rural electrification, etc. You will ask yourself if government had existed here in Imo in the past. You will be forced/provoked to mobilise the youths to Abuja, drag Ex-Imo Governor Rochas Okorocha out from the National Assembly and gave him 24 strokes of cane. Chief Rochas Ethelbert Anayo Okorocha was elected Governor of Imo State between 2011 - 2015 - 2019, a total of eight solid uninterrupted years. He later forced himself to Imo West Senatorial District as their Senator where he is serving currently in the National Assembly.  Painful as it may, looking at the ugly Imo situation, bad leadership, bad governance and mismanagement of public resources, you will be forced to assembly Imo political leaders at a market square, elected or appointed, past and present and give each 12 strokes of cane as a punishment for filtering away public goodwill and confidence reposed in them to serve.

The current state of Imo infrastructure has a big question mark on the humanity of our Imo political leaders, weather in APC, PDP, APGA, etc, they are all the same doing their trade. Unfortunately, a bad system had begotten a bad followership. I weep for my people! 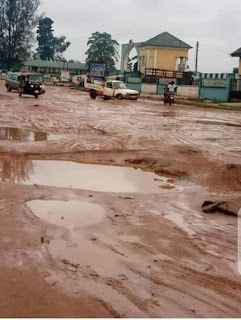 I could remember though painfully that during the Okorocha's administration, I was made a sacrificial lamb because I challenged the maladministration in the state, I was protesting, asking for good governance. I was pleading and begging the Governor to use our resources to work for the state. I shouted, cried but was persecuted, harassed, intimidated, with threats and attempts to kill me leading to my going on exile for safety.

It's on record that I rejected millions, land and car offered for me to close my mouth. Many called me a foul for that. I was told to collect the money and kept quiet that the Imo doesn't belong to my father but unfortunately, the money I rejected were offered to my fellow Imo youths who were mobilised against me to shut my mouth up. Many of those Imo Youths today masquerading as protesters were given lands, money and political patronage in Okorocha’s administration. I turned their enemy overnight immediately government bought them over. I know they are reading this article, many also have sought for my forgiveness since they lost out of power game. Truth like this hurts, like it will keep hurting them. Ozoemena!

Out of caution, I kept away from participating in Imo political activities. I had concentrated on my business which is Media & Event Management under my company (IfeanyiCy Media & Events) to fend for my family. I run a media company which promotes, profiling and enlighten the general public as well as event management and planning. If by chance you see or read hype content from my platform, known it to be a PR job given to my firm which is being carried out professionally.

Having said this, I felt so pained watching the same youths of yesterday who were dinning with our oppressors in-chief masquerading as today's activists and crusaders because their sources of milking the state has been cut short by power change. Nothing last forever!

To the current administration in Imo State led by Senator Hope Uzodinma, this current Imo situation should give you a sleepless night. You were part of the ugly past having served as Senator of Oru Senatorial District in the National Assembly for eight years and you inherited a decayed Imo infrastructure as Governor. This is not time for political correctness or blame game. This is time to wear your thinking cap, get to work. Priorities the Imo challenges starting with massive road reconstruction and rehabilitation with reputable and professional construction companies. Ensure your political appointees are doing what is right and feeding you with accurate information. No sentiment, no eye service. No round peg and in square hole. Efficiency and professionalism should be the determinant in selecting your aides. This is not time to reflect on the process of your emergence as Governor which is a pure evidence of our flawed electoral and judicial system. This is time to work, work and work that's the only way you can draw Ndi-Imo to yourself by winning their heart with good governance.

I will address you, Senator Hope Uzodinma, Governor of Imo State after your one year in office. Like I said earlier. During your predecessor in Office, Rt Hon Emeka Ihedioha of the Peoples Democratic Party PDP, I restrained from criticising his administration to give him one year benefit of doubt, but unfortunately he was removed as Governor of Imo State by the election petition tribunal which ended at the Supreme Court. You were sworn-in as the beneficiary of that process. I had also announced to give you one year benefit of doubt to see your government policy direction and focus on project implementations. I did same to former Imo State Governor, Senator Rochas Okorocha but he failed leading to my outburst.

Until after then, I will withhold my assessment of your 3R government and make a decision appropriately at the right time. To Uzodinma, let their be good road. Your time is ticking!