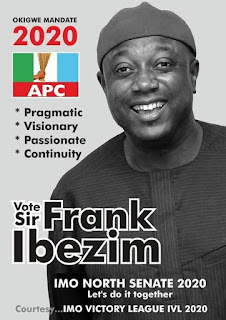 The All Progressives Congress (APC) has come out to say that the primary election conducted by the Senator Surajudeen Basiru-chaired Committee for the Imo North Senatorial District By-Election is the recognised exercise.

The APC, in a statement, signed by Deputy National Publicity Secretary, Yekini Nabena, on Thursday, explained that the Basiru-chaired committee is the duly appointed panel by the party’s Extra-Ordinary National Convention Planning Committee chaired by Governor Mai Mala Buni.

The statement maintained that only outcomes from the Basiru-chaired committee is tenable and will be accepted by the party.
Meanwhile, the committee conducted the primary election today with Frank Ibezim emerging winner with 13,637 votes.

The primary election conducted is to enable the party to pick its candidates ahead of the October 31 legislative by-elections that will be conducted in some states of the federation.
This follows the death of the Senator who represented the district, Ben Uwajumogu on December 18, 2019.
Uwajumogu occupied the senatorial seat after the Federal High Court ordered a rerun election, defeating the candidate of the Peoples Democratic Party (PDP), Senator Athan Achonu.
Mr. Uwajumogu scored 56,076 votes to defeat Senator Achonu polled 43, 815 votes.