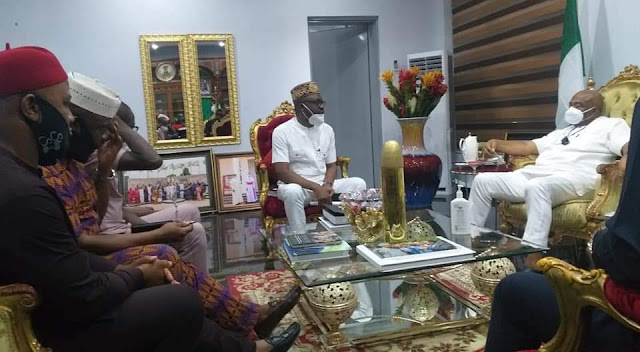 The member Representing Ohaji/Egbema, Oguta and Oru West Federal Constituency, Hon. Uju Kingsley Chima, scored another mile stone in peace making on Monday as he led a delegation of stake holders from Ohaji/Egbema and Oguta to mediate between detained members of ISOPADEC Staff and the State governor.

Speaking on behalf of the delegation at the governor's office, Hon. Uju Kingsley who is synonymous with peace apologised on behalf of the protesting staff, the lawmaker condemned their action, pleaded with the governor for their release with an assurance  that such an ugly trend will never occur again.

Also speaking, Hon. Heclus Okoro, Hon. Dr. Kanma Nwauwa, Hon. Henry Igbomezie, Hon. Emeka Benjamin and Hon. Andrew Nwokotubo all apologised on behalf of Ohaji/Egbema and Oguta for the misconduct of members of ISOPADEC staff and the embarrassment their action might have caused the governor and the State at large.

The governor, Hope Uzodinma, moved by the visit and apololgy from the stake holders commended them for coming and assured them he will see what he can do for the release of detained Staff ISOPADEC.
The governor also stated he can't be a governor and watch the oil region being controlled by thugs, nothing can be achieved by violence.
Gov. Hope Uzodinma said he will do everything possible to see that he brings an end to the massive fraud, mismanagement and corruption going on in the Commission.
The governor reassured the delegation he is a law maker and know what ISOPADEC is, he has not touched the Commission's money which is about #2 billion. His interest is the development of the oil producing region not  few people enjoying the wealth of the 2 local governments.