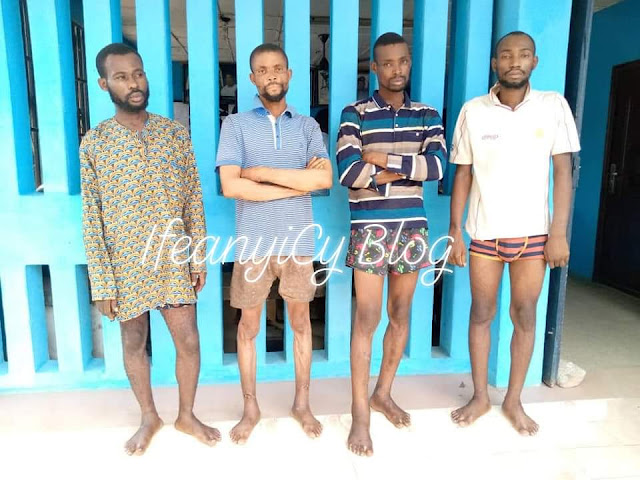 The tactical team of the Imo Police Command, Anti-kidnap Unit led by CSP Linus Nwaiwu had reportedly round up and arrested four kidnap suspects and rescued their victims kept hostage in a forest at Obibidzena Owerri North LGA of Imo State.

Following credible intelligence report, IfeanyiCy blog learnt, the Operatives of the Anti-kidnap unit of Imo State police command led by their commander ,Barr. Linus Nwaiwu had stormed the kidnappers camp in a forest and successfully released their victims , one of the victim sustained a gun shot injury at leg from the kidnappers.

The 4 - kidnap suspects were arrested on the 25th of July, 2020 at a Bustop at Naze, Owerri North LGA of Imo State following police tactical intelligence

The suspects had confessed to the crime and equally volunteered useful information that will lead to the arrest of their gang members at large.

You could recall that in the past three weeks, Imo Police Command had arrested and paraded notorious criminal gangs and kidnap ring leaders who had been terrorising Imo citizens between the hours of 6-8pm on Friday's and Saturday's. The ring leaders and their networks were round up and arrested following credible intelligence and monitoring from the special and combined efforts of the Anti-kidnap Units and SARS Team of the Imo State police command under the control and leadership of CP Isaac Akinmoyede . The kidnap gangs which operates within the New Owerri, Avu and Ogbaku axis of Owerri have been arrested and will be charged to court soon. The police also recovered arms and ammunitions as well as recovered ransoms paid by the kidnap victim's family.