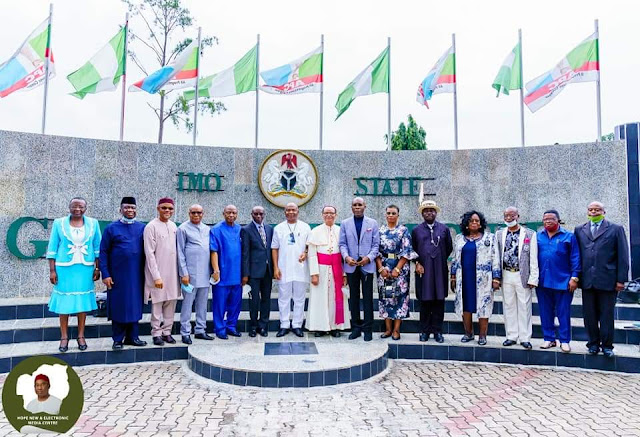 According to the governor, the Governing Council presents a golden opportunity for the state to revive an Ivory tower that was the pride of Imo people 20 years ago but today mistakenly is in a pillory.

His Excellency also recalled that in year 2000 Imo State University was ranked, by the Nigerian Universities Commission (NUC), as the best state University in the country and the 10th overall among Federal and State Universities but now has precipitated a free fall that has seen the University descend from its olympian height to the dungeon. Hence, the urgency with which the Government wants to rehabilitate the citadel of learning and bring it back to its days of glory.

Gov. Uzodimma urged members of the council to avail themselves the report of professor Nebo's led Investigative panel on Imo state university.

The Imo state  Governor, Senator Hope Uzodimma expressed confidence in the Governing Council as he further admonished them that much is expected from them.

'' You should, as quickly as possible ,turn Imo State  University into a thriving  digital centre for quality, functional scholarship, where graduates that are ready materials for the labour market are churned out annually" the governor said.

The members of the Governing Council are:

Other Statutory Members include: