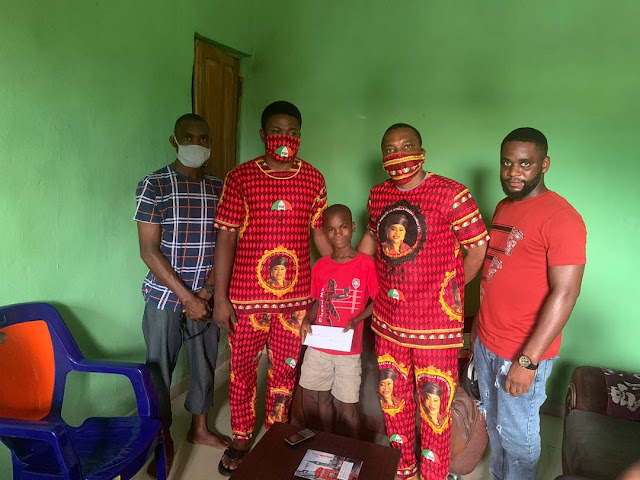 Former minister of Aviation and Senator of the Federal Republic of Nigeria, Stella Adaeze Oduah yesterday honored her pledge to support the educational and talent development of 9-year old Oluomachi Joseph Opara, who sings songs of praise to God with an angelic golden voice while hawking at the streets of Owerri to help his family.

Blogger and Social Media Influencer, IfeanyiCy Njoku had reported during the weekend that the Senator had contacted him through his Personal Assitant, Steven for the identity and address of the boy's parents. Yesterday, Senator Stella Oduah through his PA, visited the Opara's family at Nekede Old Mechanic Village, Owerri and made a handsome donation of N300,000.00 (three hundred thousand naira) in fulfilment of her earlier promise when the boy songs of praise went viral on the Internet, courtesy of short videos of Oluomachi recorded by Mr Stanley Nnamdi and helped to be circulated by IfeanyiCy Njoku and many others.

Senator Oduah while handing over a cheque of N300k to Mr Bethran Opara, father of Oluomachi Joseph Opara, promised to support her education and musical talent development, irrespective of the fact that the Governor of Imo State, Senator Hope Uzodinma had adopted little Oluomachi as his son. She asked the family to always reach out to her, as she will continue to assist the boy realise his goals and dreams in life.