S’East APC leaders meet in Owerri, weigh options ahead of 2023 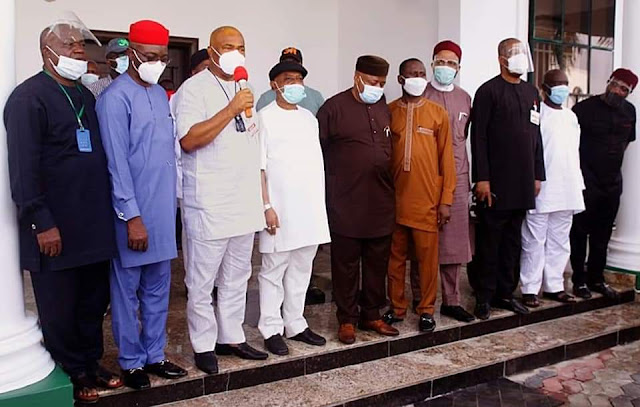 Some All Progressive Congress (APC) Southeast leaders have resolved to present an impregnable and united front ahead of the 2023 general elections.
The high-powered APC leaders who met in the Government House, Owerri, Imo State, yesterday, included the five ministers from the region, former Senate President and member of the National Caretaker Committee of the party, Dr Ken Namanni, and Imo State governor, Hope Uzodimma.
They also resolved to support President Muhammadu Buhari and collaborate with the Federal Government to ensure that the people of the Southeast derive maximum benefits from the centre.
Host Governor Uzodinma who briefed newsmen after the closed-door meeting disclosed that the leaders were more than committed to work harmoniously with the Federal Government for the overall benefit of Ndigbo.
The ministers at the meeting are:  Dr Chris Ngige, Labour and Employment; Dr Ogbonaya Onu, Technology; Geoffery Onyeama, Foreign Affairs; Mr Uche Ogah, Minister of State for Mines and Steel Development; and Hon. Emeka Nwajiuba, Minister of State for Education.
Senator Uzodimma disclosed that the leaders were more than committed towards strengthening the APC in the zone so as to make it a party of choice for Ndigbo.
The governor also said that Imo is the gateway of APC in the Southeast, adding that the ultimate goal of the leaders was to ensure that the people of the entire five states of the Southeast derive maximum benefits from the Federal Government.
“We need to re-examine our alliance strategies and see for ourselves which alliance trend has paid the Southeast more. The First and Second Republic alliances we had or the ones we are having in this Third Republic,” the governor said.
Former Senate President Nnamani in his speech said that the choice of Owerri for the meeting was strategic because as the only APC state in the region Imo State provides the launching pad for the APC in the Southeast.
He also said that the leaders came to show solidarity to the only governor the party has in the region and to congratulate him for making the party proud through his laudable projects.
Labour Minister, Dr Chris Ngige assured the people of the Southeast that those of them in the federal cabinet were alert to their duties and that everything due to the people of the region would get to them. He announced that two rail projects have been embarked for the region and that work would soon commence on them.