Menu
Home » News » It's True that there is pension fraud before I took Over as Governor, but Uzodinma Lied on Figures, Says Ihedioha.

It's True that there is pension fraud before I took Over as Governor, but Uzodinma Lied on Figures, Says Ihedioha. 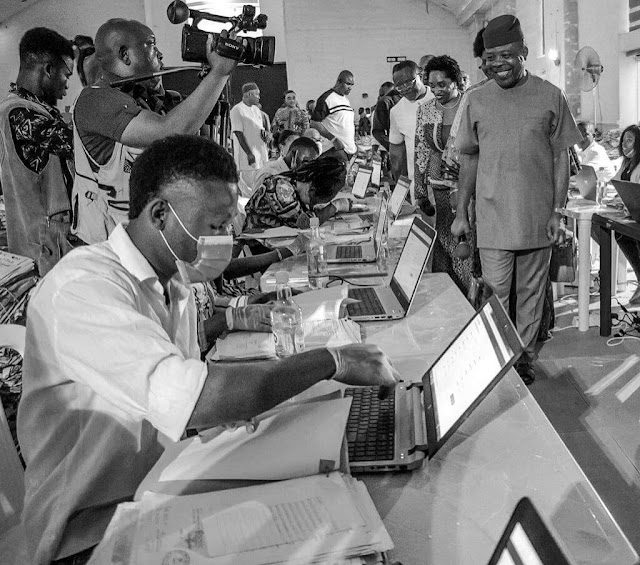 Former Governor of Imo State, Hon Emeka Ihedioha has defended his 7-months administration in Imo State over Pension fraud, verification and other related matters as against the information distorted by his successor, Senator Hope Uzodinma leading to the delay in the payment of pension and gratuity of retired Imo civil servants.

"No pensioner earned up to N1m per month under Ihedioha administration.

In the last 24 hours I have received hundreds of phone calls and WhatsApp messages in reference to a Vanguard publication yesterday July 4, 2020 under the above heading. As the Executive Chairman of Imo State Pension Commission under the Rebuild Imo administration of His Excellency Rt Hon Emeka Ihedioha CON, I am forced once again for the second time since we left office to make clarifications on unfounded allegations against our Pension Reforms by the present government.

Vanguard quoted Governor Hope Uzodinma to have published 8 names as the Pension Fraud Masterminds earning N330m annually. The names and the corresponding amounts are:

The sums published did not add up to N330m, but N114.5m, so where is the balance? I called up our Pension Payroll master list derived from the pension verification exercise we did. This list has the names of all verified pensioners, their BVN and the amounts we paid them monthly. As at December 2019, we had 25,244 names on the list. I did a thorough search and came out with the table below.

Out of the 8 names they published, No 5 on their list – Emenalo Theresa was not on our verified pensioners list and did not receive any payment during Ihedioha administration.
No 2 on their list – Njoku Damian appeared twice on our verified list and both names earned N1,141.73 and N5,022.57 per month or N13,700.76 and N60,270.84 per annum respectively.

No 4 on their list Anyanwu F. N. was not on our list, but to foreclose any doubt, I checked for any names near that in our verified list and I found two names - Anyanwu Nobert and Anyanwu Ndidi (these names could be Anyanwu N without the F).

In effect 4 out of the 8 names the State Government published are not verified pensioners. The other 4 names verified have their entitlements listed in my table above and you all can see that it is nowhere near what the state Government published. The total entitlement of all from our list including the 3 names that were not ascertained amounts to a mere N5,086,219.20 (Five million and eighty-six thousand Naira) as against the N330m claimed by the State Government.

On the issue of Judges pension, it is well known that Judges retire on their consolidated emolument making their pension pay higher than other civil servants. On the particular case of a retired Chief Judge of the State that the Governor said he is earning more than other judges; his pension is the same amount with that of 4 other Judges and his earnings is still below N1m per month. In fact, during verification we reduced the previous pension of most of the judges in line with relevant Government circulars. They complained but we maintained our stand because we were backed by the law.

The Governor mentioned over 1000 pensioners who retired in 1976 still earning pension. This is not correct as there is no pensioner who retired in 1976 on our verified list. The earliest we have is 1977 and there are only 14 of them. These people are alive, were verified, their BVN, account numbers, Banks and phone numbers are verifiable and they can be contacted, unless any of them died in the last 6 months we left office.

The late former SSG Osuigwe was also mentioned by the Governor to be receiving pension. This also is incorrect as the late SSG Osuigwe was not verified, his name is not on our list and he was never paid any pension during Ihedioha’s administration. We never had any dead person on our list, anybody that has any proof to the contrary should please come forward with it.

There is no doubt that there was pension fraud before the Ihedioha administration took over, hence the painstaking pension verification exercise we did. All pension payments during Ihedioha’s time were made electronically through BVN direct to the Bank account of pensioners. Every pensioner’s account number, Bank, photograph, phone number and address are in our records, so if there is any fraud by anybody, such should be arrested immediately.

Nobody on the verified list earns up to N1m per month. We also reported after the verification exercise that the pension payroll we met was dubious, that there were double loaded accounts and that we saved over N200m per month after the exercise. It beats me why the State Government will keep going back to mention problems we identified when we came on board and took care of, as if it happened during the Ihedioha’s time.

I mentioned in my earlier rebuttal to Hon Emelumba’s disparaging remarks on our pension reforms that the verified pension payroll is domiciled in the Server in the Pension Office in the Accountant General’s office and is also hosted on Cloud, which can be assessed from any corner of the globe. I personally handed over 5 computer servers and 50 laptop computers to the Director in that office who is still there till today. It leaves bad taste for the present Government to keep saying that we did not hand over anything to them and I wonder why they have refused to use these facilities.

I also mentioned that the Pension Consultant during Ihedioha’s administration had on different occasions sent the database to officials of the State Government including their current Pension Consultant, why won’t they study the list before making spurious allegations. Again, I forwarded the verified master list to the Chairman of Nigerian Union of Pensioners Imo State – Sir J B Ugochukwu, I wonder why he has remained silent when these unfounded allegations were being made in his presence. I encourage the pensioners whose names were listed to take action to clear their names, let them print their accounts statements for the 5 months Ihedioha paid them to negate these baseless allegations.

It is important here to separate Ihedioha’s Pension reforms from his Civil Service reforms. While the Pension Reforms were duly completed and implemented, the Civil Service and Local Government reforms were in process when the administration was ousted. The deep rot in these systems were identified and being addressed.

The present Government should not mix the two reforms as Governor Uzodinma uses Pension and Civil Service interchangeably. We encourage him to continue and conclude the reform process the Ihedioha administration had started but couldn’t conclude.

In Conclusion, no matter what anybody may say about Governor Hope Uzodinma, I sincerely do not believe that he will deliberately come out to make spurious allegations as weighty as this unfounded N330m pension fraud. I put the blame squarely on his Pension Advisers and Consultants, it is either that they deliberately want to give him a national embarrassment or they clearly do not understand what they are doing. The Governor like every other chief executive relies on information from his aides and Governor Uzodinma’s aides are not helping him.

Everything about Pensions were straightened out by the Ihedioha administration including initiating the process for Contributory Pension Scheme (CPS) which was the main reason for setting up Imo State Pension Commission and appointing me the Executive Chairman. Instead of the Pension handlers of Governor Uzodinma to advise him to adopt Ihedioha’s Pension Reforms like the Governor did on some of his predecessor’s programs, they keep telling him one lie or the other about unfounded frauds which the reforms eliminated, for reasons best known to them.

The other time it was that pension money was paid into a Consultants account before paying pensioners, another one was that they saved N2bn per month and now it is about 8 people earning N330m per annum, which have all turned out to be blatant lies.

Mr Governor Sir, the problem here is that your aides have gone to dust up the pension records in use by the previous administration before Ihedioha. Those records were never used by the Ihedioha administration to pay pensions. All the problems with those records were eliminated during the verification exercise. I encourage you Sir to set up a professional independent team at your earliest convenience to evaluate the Ihedioha Pension Reforms.

My advice to you Sir is that going forward, take the advice of your Pension team with a pinch of salt before they embarrass you any further.

There are no skeletons in the cupboard of Ihedioha’s Pension Reforms", he concluded.