Menu
Home » Politics » IMO PROBE: WHY OKOROCHA IS IN COURT

IMO PROBE: WHY OKOROCHA IS IN COURT 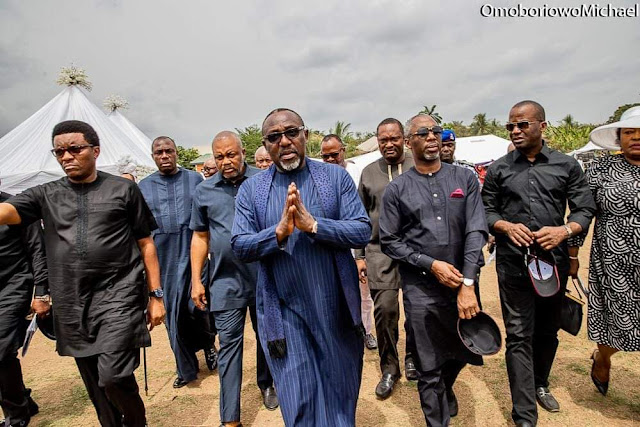 Justice Ahmed Mohammed of the Federal High  Court, Abuja has refused to strike out a suit instituted by the former governor of Imo State, His Excellency Senator Owelle Rochas Okorocha over his obvious vindictive and politically tainted probe by the Imo State government. The Judge adjourned the matter till Tuesday, July 14th after Mr. Joseph Mathew who stood in for the Attorney-General of Imo State and 46 other defendants sought to strike out the case on the grounds of jurisdiction. The judge also made the Imo State Attorney-General commit to a written undertaking that the government had suspended the probe till the determination of the suit, as stated by the counsel.

But, how did we get here? Is Okorocha afraid of a probe? Some people have asked; if he is sure of his innocence, why run to the court for protection?  Why doesn't he want to appear before the panel? Etc. Before I delve onto these questions, let me briefly refresh our minds on how we got to where we are.

The several probe panels set up by the short lived PDP administration in Imo State have left little doubt that they were on a mission not to investigate any allegations or suspicions of malfeasance or maladministration by the Okorocha adminstration, whom it was clearly directed to probe, but to hang anything and everything, damaging on the Okorocha adminstration, and if possible, manufacture indictments, if they run short of willing renegades, ready to tell barefaced and unintelligent lies for an alleged promise of acquittal.

While these panels were sitting and even before they were in inaugurated, the Imo State government had written several petitions to the EFCC and ICPC, alleging all manner of things. Nothing could have better exposed the desperation and  ill intention of these panelists and their sponsors than this action which makes it clear that they can't wait to do away with Rochas, however, it comes.

This action by the PDP may be politically understandable, because in politics, especially in our clime, you do not allow a formidable rival any space of comfort. You have to keep pummelling him and his associates until he is weakened or frustrated. So, the PDP understood how powerful Rochas is and how formidably loved he is among the ordinary people. They knew that the Ogboko born billionaire cannot be easily waved off by merely wishing it, especially, with his enormous investments on the people. They also understood that as long as Owelle is left alone to operate in convenience, he would always be a political nightmare to them, hence, they set out on what many analysts have described as a voyage of blackmail. They know that to "cut Owelle to size", you must reduce his influence among the ordinary people, and to reduce his influence among the people, you must demonize him among the people. Of course, you can argue that this was a smart political move. Which politician feels comfortable in the presence of a powerful and intimidatingly popular rival?

When Senator Hope Uzodimma was declared governor of the State by the Supreme Court, some people thought that the former Senator would look ahead and if he wanted to look behind, use his own eyes, instead of using mercenaries put in place by the PDP to wage a war of attrition against one of the leading lights of the Southeast and a renowned visionary of the progressive predilection, but Chief Uzodimma curiously retained Ihedioha's panels and its membership, even though it is obvious that 90% of members of the panel are card carrying members of the PDP. He has been accused by some Party leaders of hiding under the PDP umbrella to nail a man he sees as his biggest threat in his ambitious agenda of  pocketing the APC structure in the Southeast. Not a few people also believe that he is being equally spurred on by powerful external forces who see Okorocha as their biggest threat going into 2023. Uzodimma's argument that he didn't want to disrupt the work the panels had done is mischievous, because if he could disrupt ongoing infrastructural projects initiated by Ihedioha and even discarded a pension and civil servants' verification exercise which the Ihedioha administration spent hundreds of millions of Naira to execute, what is so special about these panels that he couldn't disband them and personally set up his own panels to fight his war for him, or if they will be sincere, properly investigate these allegations against Okorocha? A simple explanation is that Chief Uzodimma wants to use Ihedioha's sword to strike Okorocha. But, the sword bearer is not invincible.

From the foregoing, any sincere reader would have understood that these panels are not seeking any truth, but seem to have a hatchet job to execute. They have a clear agendum to nail Okorocha. Some of the members of the panel had been openly cynical of Okorocha's governance styles, from the onset of Okorocha's administration, while others had been caught on record, boasting that their biggest joy would come the day, they see Okorocha in prison. Uche Onyeagucha who signed the appointment letters of these panelists as the Secretary to the ousted Ihedioha administration had openly boasted, long before Okorocha exited office, that he should start sewing his prison uniforms.

There is this saying in Igbo land that it is only a tree that hears that it would be cut down and stays put, without taking steps to protect itself. Owelle Okorocha is all for an impartial probe. He is ready with files and every record of transactions and interactions he had during his time as governor and he is talking to those whom he should talk to. He has not gone to Court because he is afraid of giving accounts of his stewardship, after all, he has been doing that ever since he became governor. The evidences of his prudence in the management of Imo's resources are all over Imo State.

Okorocha cannot throw himself at a group of bitter hyenas seeking to devour him, hence, his decision to head to court to enforce his fundamental human rights and stop the constant harassments by these panels.