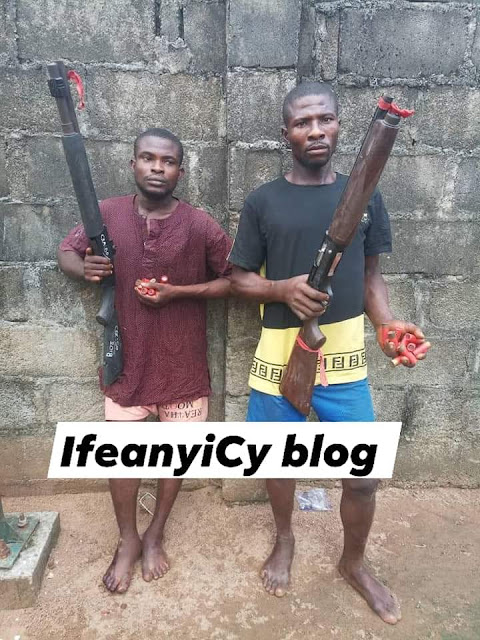 It was a total display of bravity and gallantry when battle ready police officers under the command and coordination of the pragmatic Imo Police Boss, CP Isaac Akinmoyede with credible intelligence tips, tracked down '4040' and Stan;  dreaded gang leaders of the famous Osisi kanku, who were earlier in 2018 gunned in Abia State.

The two notorious armed men escaped during the 2018 raid of their hideouts, changed locations and had been terrorising citizens and road users in deadly kidnap escapade.

The gang IfeanyiCy blog learnt were responsible for the kidnapping of Chidimma Uchegbu, a native of Umuedo Obohia in Ahiazu Mbaise LGA IMO State, who is the wife of Rev Canon Stephen Uchegbu in 2018. According to credible information, they were also responsible for the kidnap of Mrs Ogechi Inyama from Amumara Ezinihite mbaise LGA IMO State same 2018.

All efforts made by the police to apprehend the kidnappers then atlarge proved abortive, not until recently when the two suspected kidnappers, Ozoemena Onyekachi Goodluck (alias 4040) and Agbakwuruchi Stanley Uchenwa who hails from Umulolo Amato Amuzu in Aboh Mbaise LGA of Imo State resurfaced for operation and were tracked down in their criminal hide out by men of the Anti-kidnap Squad of the Imo police command led by CSP Linus Nwaiwu, Commander Anti-kidnap, Owerri Police Command and arrested them during exchange of gun battle at Otulu Amumara Ezinihite mbaise LGA, IfeanyiCy blog learnt.

The source who informed IfeanyiCy blog on phone call said, "do you know that the operatives of the Anti-kidnap came to our village today and arrested 2-kidnap suspects. We couldn't believe we were living with armed robbers and kidnappers in our neighborhood all this while". Please thank Imo CP and Anti-kidnap boss for us. They did a good job. We can now sleep with our two eyes closed".