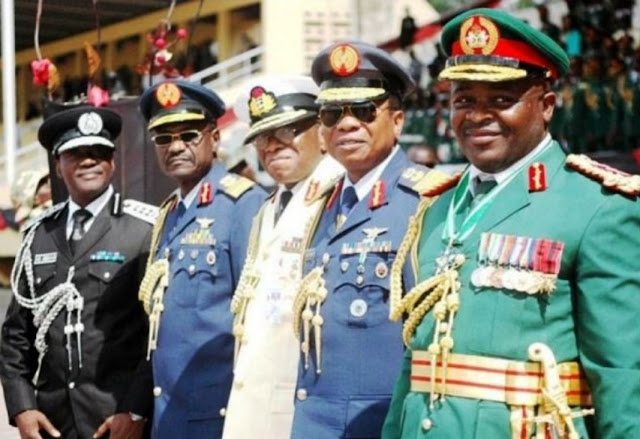 Sub: FRAUD IN ALL THE PARAMILITARY AGENCIES UNDER THE FEDERAL MINISTRY OF INTERIOR

We are constrained to urgently bring to your notice, the perennial and undermining fraudulent acts being perpetrated by the leadership of all the paramilitary agencies and their shameless collaborators, before it gets out of hand.

We are not unaware of the relentless efforts the Federal Government to ensure that the welfare of all public servants in the country is adequately taken care of.

But while the administration of President Muhammad Buhari keeps doing the needful in terms of improving the welfare of all officers and men of all the military and paramilitary agencies in the country, the incorrigible saboteurs in the corridor of leadership of all the paramilitary agencies in the Ministry of Interior are hellbent in swindling their hapless officers of their rightful financial entitlements.

Sir, the following are our prayers:

Sir, we want you to:

1 Probe into the use of all the financial aids accruing to all the agencies from foreign organizations in the last 5years. ICDO in the case of Nigeria Security & Civil Defence Corps.

4. Probe into the reason for the non implementation of the 2018 Salary Review in NSCDC, IMMIGRANTION, CORRECTIONAL SERVICES, which had been implemented in the Police and other Federal Government Agencies.

5. Probe into the callous, sadistic and arbitrary removal of the Shift Allowance from the salaries of NSCDC officers in the year 2016; and the incomplete refund of the said allowance. Shift Allowance refund for 8 months is still outstanding.

6. Probe into the non payment of promotion arrears 2016-2017 in all the agencies most especially NSCDC. And where claims of payment are presented, review the amount paid, which are usually infinitesimal. The promotion arrears for 2018 have yet to be paid, despite repeated orders for the payment from your esteemed office.

7.Probe the supposed payment of minimum wage arrears in NSCDC and other agencies in the ministry, where the hopes of officers are being dashed with the laughable amounts added to their already fretted salaries.

8. Probe into the inhumane manipulation of the January, 2020 salaries of all officers and men of NSCDC, IMMIGRATION and others through over hyped payment platform - IPPIS. About 45% of the individual salaries of all officers were deducted by the greedy heads and their collaborators under the guise "loan deduction ", which was neither applied for by any officer nor approved by any authorised agent of the Federal Government. This is daylight robbery!!!!!!!!!!! This the comeuppance of unchecked impunity and corruption in the ministry.

Sir, we are helpless. We are powerless. But we have the firm belief that you are sent to the ministry by the Almighty God to liberate us from the hand of the Pharaohs that are bestriding all the agencies under your ministry. Please sir, see to our pleas and do the needful.

Thanking you in anticipation of your swift and favourable response.

Yours in national service,

All officers of all the paramilitary agencies under the Ministry of Interior.