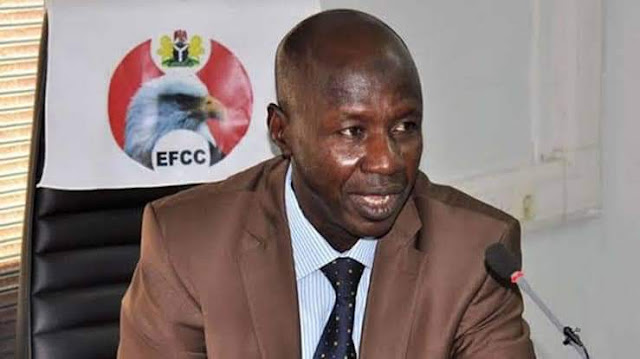 President Muhammadu Buhari has approved the immediate suspension of Ibrahim Magu as acting chairman of the Economic and Financial Crimes Commission, EFCC.
This is contained in a statement issued by Umar Gwandu, the spokesperson to Attorney-General of the Federation, Abubakar Malami, on Friday.
The AGF said the suspension was in order to allow for unhindered inquiry by the Presidential Investigation Panel under the Tribunals of Inquiry Act and other relevant laws.
According to the statement, “President Muhammadu Buhari has also approved that the EFCC Director of Operations, Mohammed Umar, should take charge and oversee the activities of the Commission pending the conclusion of the ongoing investigation and further directives in that regard(s).”
Mr Magu is being probed by a presidential panel investigating alleged corruption and insubordination.
The allegations were levelled against him by Mr Malami.
He accused Mr Magu of insubordination and re-looting of recovered funds.
Mr Magu was suspended from office on Tuesday, and is still being detained while the panel investigating allegations against him still sits.