Imo State chapter of the Peoples Democratic Party, PDP, has approached a federal high Court in Owerri challenging the continuous detention of their party's New Media Director General, Mr Ambrose Nwaogwugwu by the State department of the Security Services, DSS.
PDP through their lawyers, representing Ambrose Nwaogwugwu in their writ of summon had slammed a fifty million naira (N50m) suit against the Imo State chapter of the Department of State Security Services, DSS, for unlawful detention and incarceration of Mr Ambrose Nwaogwugwu.
Ambrose Nwaogwugwu was arrested by the DSS on the 28th of April, 2020 and arraigned at Owerri Magistrate Court on the 5th of June with a 7 count charges bordering on cyber-stalking, defamation of character and inciteful messages against Imo state government.
A team of lawyers led by the chamber of  Senior Advocate of Nigeria (SAN), Chief Mike Ikenna Ahamba, IfeanyiCy Blog learnt have been mobilised by the instruction of PDP to represent and challenge the detention of the  suspect in a federal High Court as against the Owerri Magistrate Court were Ambrose Nwaogwugwu was earlier arraigned.
According to sources , IfeanyiCy Blog learnt that the Federal High Court Owerri Division shall on Monday, 15th June, 2020 hear application by Mr Ambrose Nwaogwugwu seeking to enforce his fundamental rights against the State Security Services.
"The suit filed by his team of Attorney’s led by Chief Mike Ahamba SAN, is seeking among other prayers, a declaration that the continued detention of Ambrose Nwaogwugwu from the 28th May, 2020 till date is unlawful, wrongful, unconstitutional and a flagrant breach of his fundamental rights as guaranteed by the Constitution of Nigeria."
The suit is also seeking an injunction restraining the DSS from continued harassment, arrest, intimidation and detention of Mr Nwaogwugwu. The suit further demands the DSS to tender a published apology to Mr Ambrose Nwaogwugwu in any National daily and payment of the sum of N50 million as punitive and compensatory damages to Nwaogwugwu for the unlawful infringement and breach of his fundamental rights. 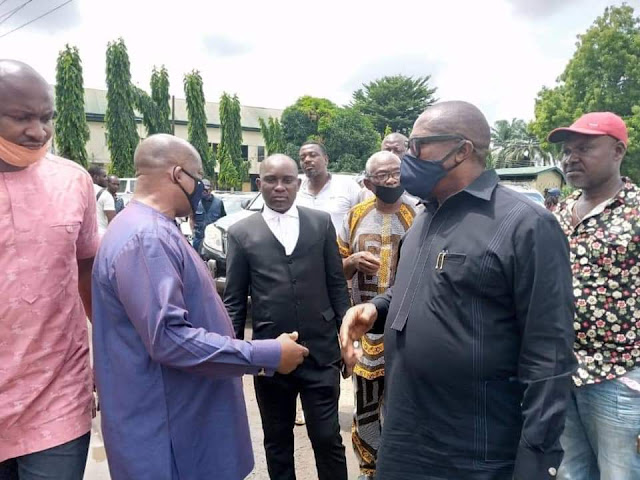 When contacted, Kelechi Ahamba Esq. who is one of the team of lawyers stated that the Charge filed by the office of the Director of Public Prosecutions DPP on behalf of the DSS at the Magistrate Court Owerri on the 5th June, 2020 and the purported arraignment of Nwaogwugwu was a nullity as there was no valid Charge before the Court. He stated that the DSS brought Count Six of the charge bothering on offence under the Terrorism Prevention ACT, 2011 at the Magistrate Court Owerri even when they knew that Section 32 of the same law makes all matters charged under the Terrorism Prevention Act, 2011 to be charged only at the Federal High Court.
He maintained that till date, the DSS has not filed any valid charge bothering on terrorism against Nwaogwugwu at the Federal High Court which is the Court clothed with the jurisdiction if they were serious to maintain such charge against him. He maintained that in the eyes of the law, the DSS has not filed any charge against Mr Nwaogwugwu and the purported arraignment on the 5th June, 2020 was a nullity and the DSS will continued to be liable for the continuous detention of Mr Nwaogwugwu from the 28th May, 2020 until the DSS releases Ambrose Nwaogwugwu unconditionally.
The suit is slated to be heard on Monday, 15th June, 2020 at the Federal High Court Owerri.