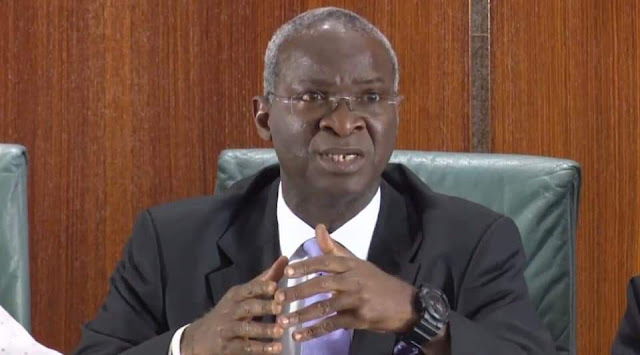 Nigeria’s Minister of Works and Housing, Babatunde Fashola, on Tuesday said he has not travelled out of the federal capital city, Abuja, since March 22 in a reaction to a raging controversy over Nigerian musician, Naira Marley.
A statement by Hakeem Bello, Mr Fashola’s media aide, described as ridiculous attempts to link the minister with a non-compliant flight recently taken to Abuja for a concert by the controversial singer, Naira Marley.
Mr Fashola is reacting to controversies generated against the backdrop of a performance by singer Naira Marley at a concert in Abuja amid moves by the government to control the spread of COVID-19.
On Monday, the aviation company that conveyed Naira Marley and his crew to the capital city, Executive Jets Services Limited, apologised for flying the singer.
In a letter on Monday, Sam Iwuajoku, the company’s chief executive officer, apologised over the controversial incident that led to the company being suspended.
Naira Marley performed at the Jabi Lake Mall in Abuja at the weekend amid measures by Nigerian government to contain the spread of coronavirus.
The singer became the subject of criticisms among Nigerians, especially on social media, after clips of his performance went viral.
The Federal Capital Territory Administration (FCTA) in its reaction sealed off the Jabi Lake mall for violating the restriction orders.
Similarly, Hadi Sirika, Nigeria’s minister for aviation, said the Executive Jets flight that conveyed Naira Marley for the concert was approved for a different purpose. He announced the indefinite suspension of the company and the flight captain for providing false information.
But Mr Iwuajoku in his statement claimed that the flight was approved to convey a judge to Abuja, adding that the passenger had, however, found his way to Abuja with the via another flight.
He explained that the company later got an offer to convey another set of passengers to Abuja.
The new development, he said, caused confusion as the name “Fashola Babatunde” appeared in the letter. Mr Iwuajoku claimed he thought it was the minister but they turned out to be “a bunch of useless people”.
On Tuesday, Mr Fashola, the minister, said he has not travelled out of Abuja since March in a bid to comply with the Nigerian government’s ban on inter-state travels.
“The attention of the Office of the Honourable Minister of Works and Housing, Mr. Babatunde Fashola SAN, has been drawn to a letter signed by the Chairman/CEO of Executive Jets Services Limited, Dr Sam Iwuajoku concerning a flight it operated to Abuja last weekend,” Mr Bello said in the statement.
“For purposes of clarity and in order to set the records straight, the Hon. Minister of Works and Housing, Mr. Babatunde Fashola SAN, has not travelled out of Abuja since March 22, 2020, when he returned there after an inspection tour of the Enugu-Port Harcourt Expressway construction work and a visit to Lagos, before the lockdown.
The decision of the Hon. Minister not to travel was taken in strict compliance with the Federal Government’s ban on inter-state travels as part of efforts to control the COVID-19 pandemic.
“It is therefore ridiculous for Dr Iwuajoku to attempt to link the Hon. Minister with any non-compliant flight.”