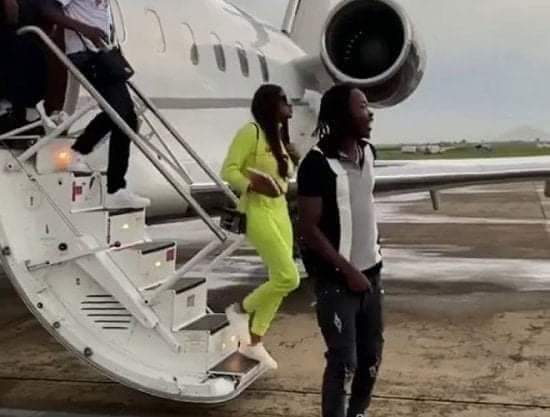 Executive Jet Services, the airline suspended by the Federal Government for ferrying Nigerian musician, Azeez Fashola, also known as Naira Marley, from Lagos to Abuja has cleared air on the controversial flight, saying it was a case of mistaken identity. Chairman/Chief Executive Officer of the airline, Mr. Sam Iwuajoku, explained that the airline was misled that the flight was operated to airlift Minister of Works, Mr. Babatunde Fashola and not the popular musician.

He, therefore, apologized to the Minister of Aviation, Senator Hadi Sirika. There had been outrage when video emerged of Naira Marley disembarking from the plane on landing in Abuja while he also hosted a concert at Jabi Lake Mall despite the interstate lockdown and flight restriction.

Sirika had, at the daily briefing of the Presidential Task Force on COVID-19 on Monday, announced the suspension of the airline for ferrying the musician when the permit granted to it was to fly a Court of Appeal Judge to Abuja and back to Lagos on a special assignment.

The Minister had said: “The flight, from the application was to convey Hon. Justice Adefope Okoji from Lagos to Abuja and back to Lagos, for an official assignment. “And in this challenging time, in our wisdom, we considered judiciary to be part of essential services to be delivered. “Having to move the Hon. Justice from Lagos to Abuja, was in order.” But it was learnt that when the judge whom the special flight was originally approved for was contacted, he reportedly notified the airline that he was already in Abuja on a different flight.

However, another request was made to the airline for a Lagos-Abuja-Lagos flight. According to the passenger manifest dated June 13, 2020, the Lagos-Abuja-Lagos flight conveyed to Abuja: Adewunmi Segun, Chinonso Opara, Fashola Babatunde, Fashola Adeshina and Adeyeye Tobi. Others were: Michael Opeyemi, Idowu Emmanuel, Seyi Awonuga, Wisdom Intoto and Abayomi Akin.

According to the Chairman, there was no indication from the names in the manifest that Naira Marley was part of the flight. He said it was assumed that the Minister of Works and Housing was actually the person that was travelling. In addition, it was the approval already secured for the airlift of Justice Adefope Okoji, who was already in Abuja that was used to fly Babatunde, who later turned out to be Naira Marley and his entourage.

In a letter of apology to the Minister, signed by the Chairman/CEO of the company, Executive Jet Services explained: “So on Saturday morning, 13th June, 2020 my staff called and told me that they have a charter flight to Abuja and that the passengers were already at the lounge. “As a rule, passenger manifest is always sent to me before any departure. “When I went through the manifest and I saw Fashola Babatunde, I thought it was the Hon. Minister of Works going to Abuja with his men, so we decided to do the flight, since he is serving Minister of the Federal Republic of Nigeria.”