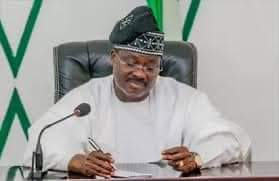 Former Oyo State Governor, former Senator of the Federal Republic of Nigeria and the Acting National Chairman of the All Progressive Congress, APC, Senator Abiola Ajimobi is dead.
He was announced dead this evening.
Senator Ajimobi was one of the those reported to be Acting as National Chairman of APC following the Appeal Court ruling on the Suspension of His Excellency, Comrade Adams Oshiomhole, National Chairman of APC.
#IFEANYICYMEDIA #IFEANYICYBLOG #EVENTCOVERAGE #EVENTPLANNING #EVENTMANAGEMENT © IFEANYICY.COM