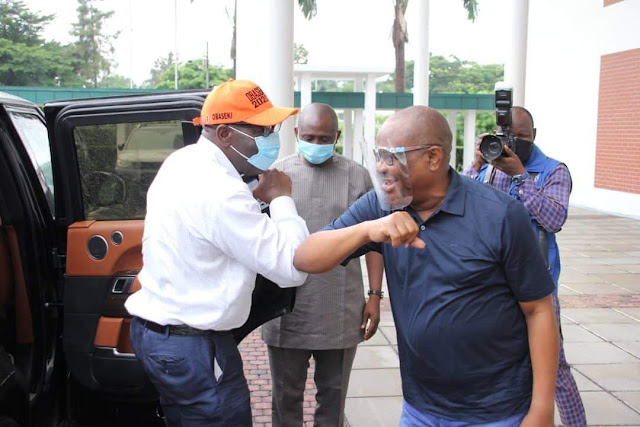 Peoples Democratic Party, PDP, strong man and Governor of Rivers State, Bar Nyesom Wike has distanced himself from the re-election activities of the Governor of Edo State, Mr Godwin Obaseki who visited him at Port Harcourt ahead of his declaration to contest for a 2nd term under the opposition party, PDP, after being disqualified from his party, the All Progressive Congress, APC.

Governor Wike had taken to his twitter handle to announce his withdrawal, saying his party PDP must follow due process in activities leading to the Edo gubernatorial exercise.

Wike who withdrew his support for the Edo Governor, Mr Obasek, to fly the party's flag at the Guber polls in Edo state scheduled for September, 2020, stated that he was focusing on developing Rivers state and warned of an impending crisis in PDP that would be a child's play compared to what APC is going through now if the party leadership in Edo state is automatically handed over to Obasek who is a New Comer to the party.

Wike alleged that because he wants everybody to be given sense of belonging , especially aspirants for the said election to be carried along in whatsoever decision the National leadership of the party have to take, he was thereafter accused of being behind the Federal High Court Order delivered in Port Harcourt restraining Governor Obaseki from participating at the Edo Gubernatorial primaries.

He warned that nobody can threaten him because he want things to be done constitutionally.