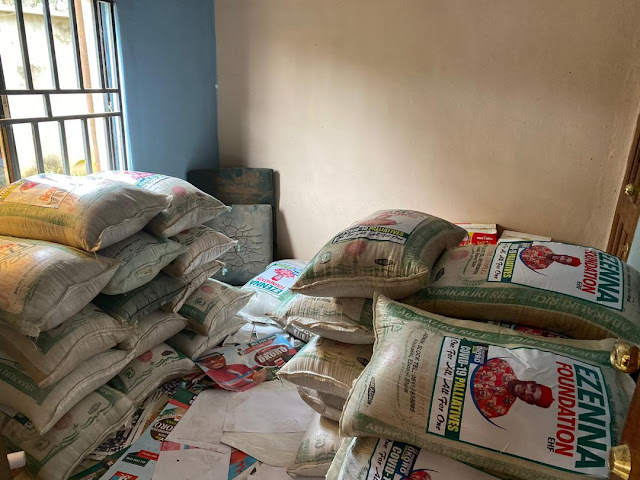 The constituents of Isiala Mbano LGA of Imo State were jubilant following the food palliative given to them by Ezenna Foundation founded by Hon. Eze-Nnanyereugo (Ezenna) Okoro. The Obollo born candidate of All Progressives Congress (APC) for Imo House of Assembly in the last general election, on 9th June, 2020, flagged off the distribution of large quantity of food items as palliative to the twelve wards in the LGA to cushion the effects of Covid-19 lockdown in the Local Government Area. Along side the palliatives was a calendar containing preventive measures toward contracting the deadly Corona Virus.

The distribution which includes bags of rice, cartons of indomie noodles, cartons of tomatoes, cartoons of power oil, among others was successfully and simultaneously carried out at ward level, viz; Ugiri, Mbama and Osuh Clan on the 9th, 10th and 11th June, 2020 respectively.

It is noteworthy to state that Hon. Eze-Nnanyereugo Okoro in a private interview, had earlier commended the robust efforts of the state government  in waging war against the dreaded disease, otherwise known as Covid-19. Also, he appreciated His Excellency, Senator Hope Uzodinma for all the appointments made so far, expressing that with the caliber of people working alongside the Governor, Imo State will truly be reconstructed, rehabilitated and recovered.

Addressing the beneficiaries at different wards, Hon. Eze-Nnanyereugo Okoro who was ably represented by Comr. Kenneth Mbamara (aka Eze Elect) conveyed the good wishes and prayers of the donor, stating that the kind gesture was not politically motivated, but out of sympathy for the suffering masses who could not move out of their homes freely in search of daily bread as a result of the prevailing Corona Virus Pandemic spreading across nations of the world.

He also revealed that despite the fact that for couple of weeks, Nigeria in general and Isiala Mbano constituents in particular had remained indoors in compliance with the Government directives, prices of food items have continued to skyrocket, resulting untold hardship to the people. This hardship, he said, motivated Hon. Ezenna to distribute food items to alleviate the sufferings of the indigent constituents of Isiala Mbano LGA. He also assured that Ezenna Foundation which is known for its philanthropic gestures would continue to join hands with other relevant organization to fight war against Corona Virus.

Furthermore, Hon. Eze-Nnanyereugo Okoro urged the beneficiaries to always observe the State Government precautionary measures and guidelines which are boldly written in the calendar given to them, while urging them to support the present government in Imo State led by Dist. Sen. Hope Uzodinma for better dividends of democracy and prosperity for all.

In appreciation, the coordinators of various wards in their separate speeches commended the good spirit of the founder of the Non Governmental Organization, adding that they had been hearing about the good works of the foundation which they likened to the vision of the State Governor, Senator Hope Uzodinma, to ameliorate the sufferings of the less privileged in the society. They also observed that if Hon. Ezenna who is currently not occupying any Government office/position could attain to the yearning of his people at this unusual time of ours, he will definitely do more if placed on a higher ground.

Responding on behalf of other beneficiaries, Mazi Sylvester Ugwunali, Mr Donatus Dike (an amputee), Mrs Phobi Uzowuru (also an amputee), Mrs Charity Chukwuezi (a cripple in a wheelchair), Chief Emma Dikeocha, Mrs Esther Mbachu and Mrs Uwaoma Caroline of Amaraku, Umunkwo, Amauzari, Osuachara, Osuowerre ward II, Osuowerre ward I and Osuama/Anara ward respectively, appreciated the concerted efforts made by the foundation in making sure that the less privileged are catered for, adding that the outbreak of the pandemic has served as a litmus test to ascertain those that truly care for the needy. They thanked Hon. Ezenna for making it possible for the indigent people of the LGA to benefit from the palliatives, while showing optimism that the likes of Hon. Eze-Nnanyereugo Okoro will in no doubt, bring back the lost glory of the Local Government Area.

More so, the beneficiaries expressed great delight towards the central distribution committee, at the unity of purpose that characterized the unbiased distribution of the palliatives, while paying special tributes to Ezenna Foundation for serving as an umbrella through which the palliatives got to them.

The high point of the event that has assumed a major discourse in the entire LGA was the passionate prayers made by the crippled, amputees, widows, widowers, indigent men and women, requesting that the Almighty God in His infinite mercies will continually answer to Hon. Ezenna at his time of needs. 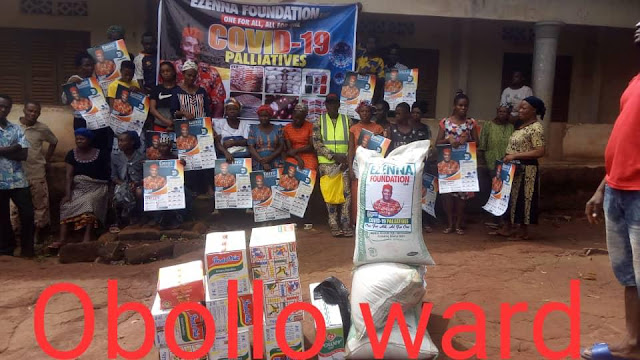 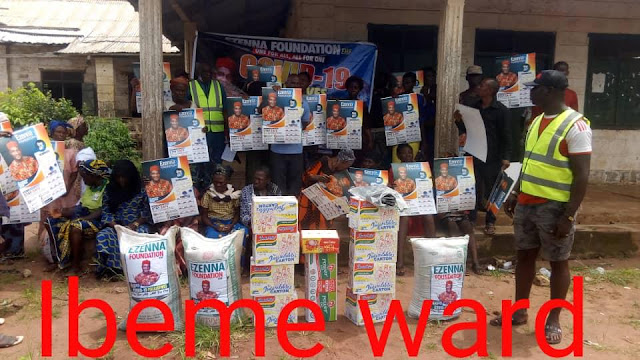 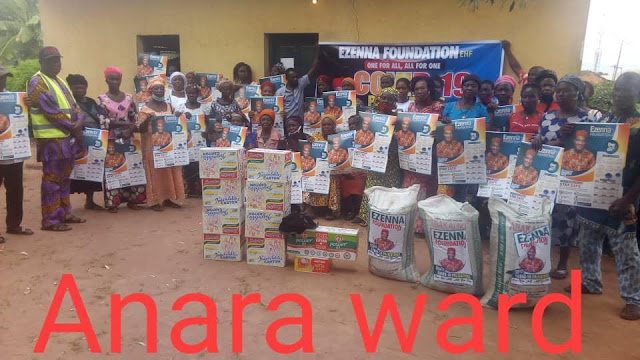 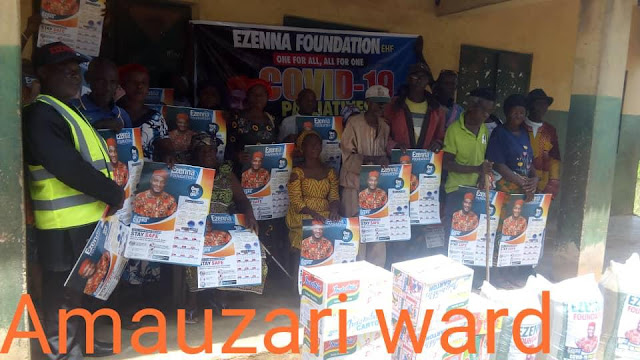 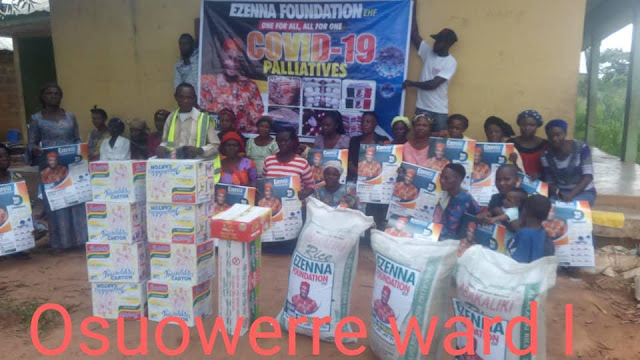 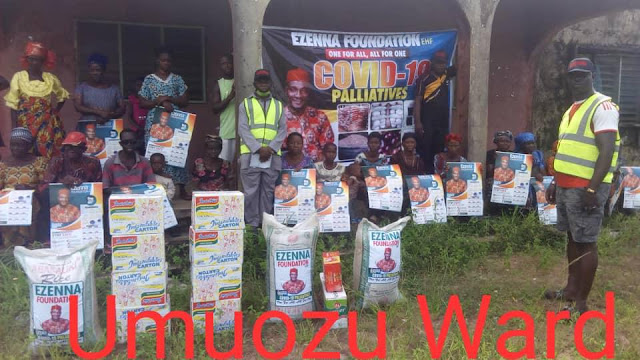 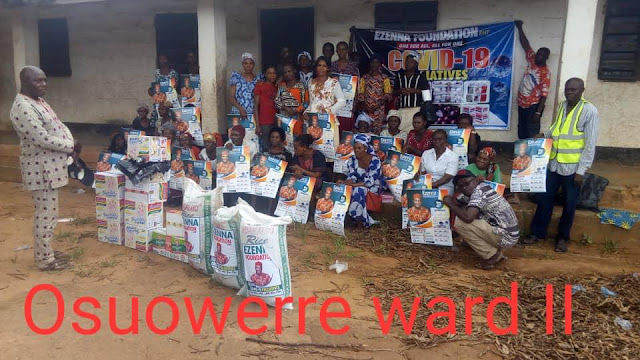 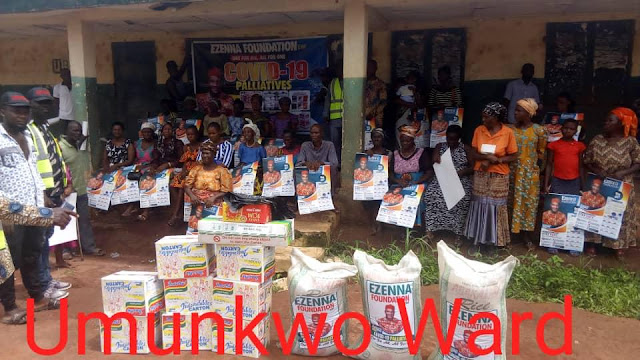 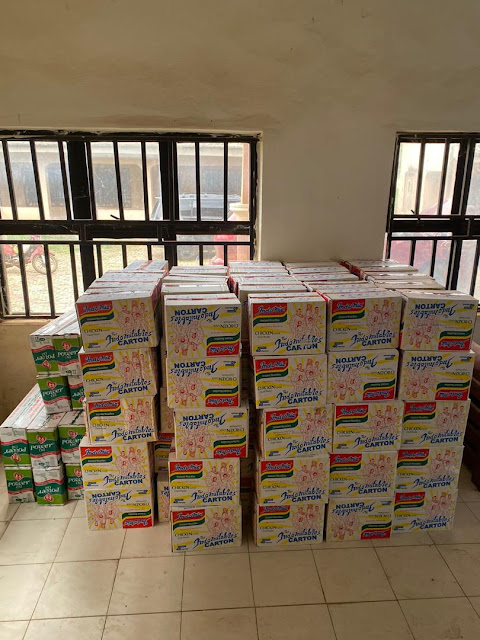 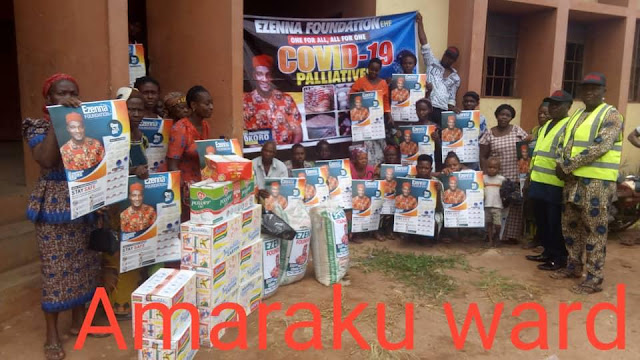