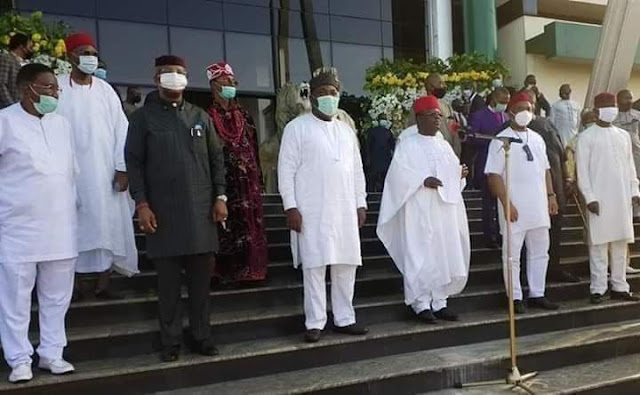 The Governors of the south east states have rejected the Inspector General of Police, Mohammed Abubakar’s guideline of Community policing in the region.
The Governors went a step further to ask, the five State Houses of Assembly to commence enactment of state security laws that will give legal backing to establishment of regional security in line with its joint security programme for the zone.
The Governors expressed disappointment with the Inspector General of Police for reneging in an earlier agreement they had with the police on the practice and composition of Community policing for the zone.
Addressing newsmen after their meeting, on Sunday, 24th May, the Chairman of the South East Governors Forum and governor of Ebonyi State, Engr. David Umahi, who was flanked by Host Governor Ifeanyi Ugwuanyi, their Imo State counterpart, Senator Hope Uzodimma, Deputy Governor of Anambra State, Dr. Ikem Okeke, his Abia State counterpart, Rt. Hon. Ude Oko Chukwu, President-General of Ohanaeze Ndigbo, Chief Nnia Nwodo, The Obi of Onitsha, HRM Igwe Alfred Achebe, Senator Dr. Jim Nwbodo and Chief Emmanuel Iwuanyanwu, amongst others said; “The recent communication from the Inspector General of Police to our Governors on community Policing composition is not in keeping with the agreement we reached with him during his last visit to the South East.
“In the circumstance, we cannot begin implementation of it until the programme reflects our earlier agreement. The South East Governors and their leaders request the IGP to revert to our initial agreement reached on community policing at Enugu.
“The forum agreed that all South East States Houses of Assembly should commence the process of enacting the state security laws in line with the South East joint security programme.”
On the Coronavirus pandemic, the Governors said they will engage the Nigeria Center for Disease Control, NCDC, to scale up testing of Coronavirus in South east states and further directed that all Igbo living outside Igbo land do obey all extant Covid-19 orders such as the presidential directive on interstate movement, World Health and NCDC hygiene protocols; the presidential Task Force and the directives of the South East Governors and directives of all Governors where they reside.
The Governors’ meeting also agreed to set up committees in the five states to work with the federal government, the World Bank, the Central Bank of Nigeria and the NSIA in their various programmes to rejig the economy, especially in areas of Agriculture, SME and Solid Minera