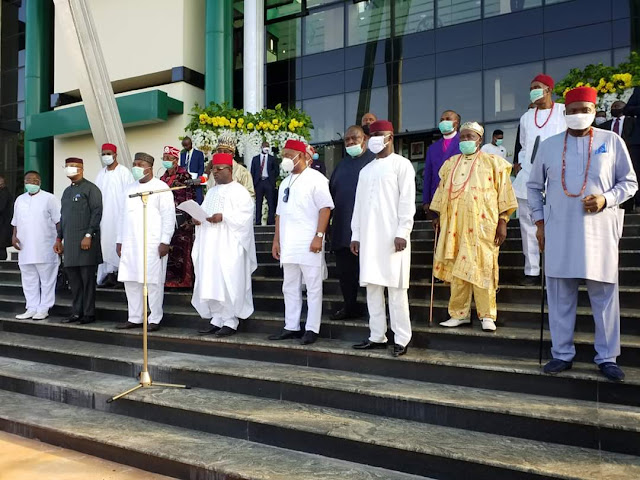 Governors of the South East geo-political zone, on Sunday, met with some leaders of the zone, at the Government House, Enugu, directing all Igbos, living in and outside Igbo land, to obey all the extant restriction orders by the Presidency and the state governments where they live as well as other precautionary measures by World Health Organization (WHO), Nigeria Centre for Disease Control (NCDC), etc, for the containment of the spread of the novel Coronavirus Disease (COVID-19).

Gov. Umahi, who noted that the recent communication from the Inspector General of Police to the South East governors on the composition of Community Policing was not in keeping with the agreement they reached with the IGP during his last visit to the zone, said that the governors and their leaders “request the IGP to revert to our initial agreement reached on Community Policing at Enugu”.

The forum chairman maintained the South East governors “cannot begin implementation of it until the programme reflects our earlier agreement”.

According to Umahi, “the Forum agreed that all South East States Houses of Assembly should commence the process of enacting of State Security laws in line with the South East Joint Security programme”.

On rejiging of the economy, Umahi stated that the “meeting agreed to set up committees in our various states to work with FGN, World Bank, CBN and NSIA in their various programmes lined up to rejig the economy, especially in the areas of Agriculture, SME and solid minerals”.

Speaking further he said that the “meeting agreed to hold a virtual meeting with the Group MD of NNPC on the issue of linking our South East State capitals with gas pipeline alongside with the pipeline programme of Federal Government of Nigeria, which is running from Imo State to Lagos State”.

On the rehabilitation of the Akanu Ibiam International Airport, Enugu, the forum after receiving brief on progress of work from the Chairman, South East Governors Committee on the airport, Engr. Chris Okoye, commended President Muhammadu Buhari, the Minister of Aviation, Gov. Ifeanyi Ugwuanyi, other South East Governors and members of the airport committee.

The governors assured the people of the zone that “with the progress of work, we are hopeful that the Airport will re-open soonest, subject to COVID-19 Federal Government programme”.

The forum also commended President Buhari, Minister of Works and Governor Willie Obiano of Anambra State for the work progress on the Second Niger Bridge, being handled by Julius Berger.

Umahi said that the meeting equally agreed that the leadership of the Ohanaeze Ndigbo “submit a working document in our next meeting on setting up of South East Stabilization Fund”, concluding that “the next Executive Committee meeting of the South East Traditional institutions shall be hosted by Ebonyi State”.