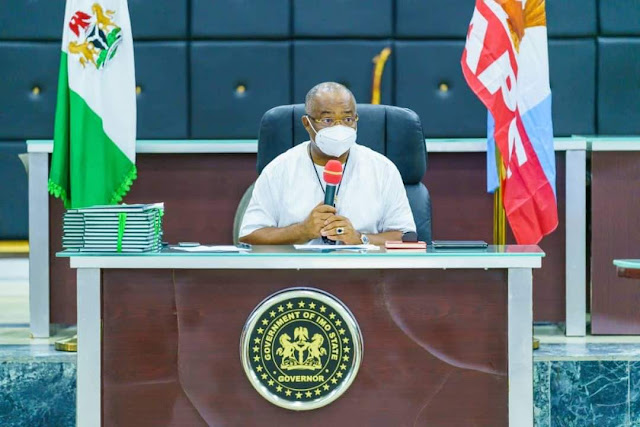 REMARKS BY IMO STATE GOVERNOR, SEN  HOPE UZODINMA, AT HIS ASSENT TO TWO BILLS PASSED BY THE HOUSE OF ASSEMBLY AT GOVERNMENT HOUSE OWERRI ON FRIDAY MAY 22, 2020

I am quite glad to give my assent to these two important bills that were passed  by the house of Assembly. By this ceremony of my assent the bills are now part of the laws of Imo state to the glory of God

I was alarmed that the financial implications for the state will not only be scandalous but indefensible. My simple calculation told me that there could come a time when the state could be spending more than one third of its resources to maintain former Governors and Speakers .

This was unacceptable to me, particularly for a state that has not been able to pay the gratuities of many retired public servants.

It is more so because the same Governors and Speakers also recieved severance allowances, amounting to several millions of Naira, when they disengage from office.

Severance allowances are  targeted at cushioning post public office financial challenges for non pensionable positions such as Governor and Speaker. How then can the same category of former public office holders turn around to receive Pensions?

Even more importantly the Pensions Act is very clear that only those who have served in the public service for a  minimum of 10 years are personable. Paying governors , Speakers and their deputies who spend a maximum of 8 years or less in office is actually criminal because it is  against the law of the land.

It is note worthy that I am supposed to benefit from this law when I leave office as governor. Yet I called for its repeal. This should leave no one in doubt that I  am acting in the best interest of our state and our people. I believe that those of us who have had the privilege of occupying exalted positions must be human enough to resist the temptation of feeding fat on  the lean resources of the state at the expense of the people. We must know when to say enough is enough.

So let no one make any mistake about it.  The governors and Speakers Pensions and Privileges law was a bad law that needed to be repealed. it was anti people. It was  in bad faith. It was  fraudulent.

I could not condone such a law. History and my conscience  will not forgive me if i did. I had no choice therfore but to ask for its repeal as part of my  government's recovery agenda. Yes, I needed  to recover the billions of public  funds that would have been lavished on a privileged few and plough it back to  the more important business of developing our state.

The bill to amend the university of Agriculture and Environmental Studies law number 4 of 2019 is a straightforward bill.  It merely sort to stick to the original registration particulars of the law on which   the National Universities Commission's approval (NUC) was based, which had no room for a multi campus arrangement  The law , as now amended , only seeks to set the records straight and to build the new university on existing structures at Umoagwo, while we relocate  the Imo state polytechnic to another deserving site.

Thank you all for your attention