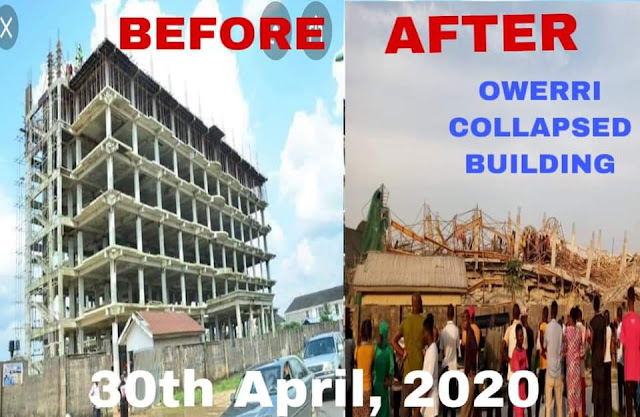 OKOROCHA'S EVIL SEEDS OF LACK OF DUE PROCESS

There is one common trait that can be found among criminals and that is the tendency of pointing accusing fingers to wrong directions to extricate themselves from obvious complicity in crimes.

It was however not out of the ordinary that the Okorocha spin doctors are fruitlessly trying in vaịn to implicate the world acclaimed due Process administration of the PDP Rebuild Imo government led by His Excellency Rt. Hon. Emeka Ihedioha CON as complicit in the latest evil fruits borne of the eight years executive impunity mediocrity driven administration of the APC government led by Sen. Rochas Okorocha.

They were being smart by half, by trying to sing the blame games by pointing at wrongful directions.

People like us, as intellectual historians will always, without any fear of contradiction, posit irrevocable facts and incontrovertible records as it happened with us not too a distant time as 8 years back.

You all will agree with me that Okorocha's government for eight years was characterised by administrative recklessness where rule of law and due Process were sent to the abyss and Rochanomics was enthroned as the official mudus oprandi of administration.

In fact, Okorocha has come out in different fora to defend his many acts of executive impunity of relegating due process and rule of law as a way to governance.

In the link below, his deputy corroborated with him also that he does not follow due process.

Now, the question should be, why do buildings collapse?

"Structural integrity and failure is an aspect of engineering that deals with the ability of a structure to support a designed structural load without breaking and includes the study of past structural failures in order to prevent failures in future designs."

"Some of the main causes for building collapses are bad design, faulty construction, foundation failure, extraordinary loads, unexpected failure modes or a combination of causes. But collapses also occur due to natural disasters such as earthquakes, floods, hurricanes, cyclones and fires."

When you look at the causes of building collapses, there has not been any natural disasters during the eight years Okorocha reigned as a governor. So natural disasters are ruled out. Now we are only left with bad designs, and faulty construction and foundation failure.

It is safe to say that why most buildings in Owerri failed were basically either bad designs, faulty construction or foundations failure or all the three combined together since we do not have any kind of natural disaster that could have altered that, so they were mainly man made disasters.

In building technological architecture, 'the strongest part of any building is the foundation as it bears the weight, compression and tension of all other parts of the structure of a building'.

Then that brings us to the of regulatory bodies under the Okorocha's government.

The fact is that regulatory bodies like OCDA, ministry of works, etc under the Okorocha administration were all moribund as they were particularly non functional.

Only family members with no relevant industry knowledge or the fieldt expertise were deployed to such bodies which were seen as cash cows and due process and due diligence were thrown to the dogs.

OCDA under Okorocha turned to a trading centre rather than a regulatory government agency for quality control where highest bidders were given free passes to build whatever they like without technical analysis and approval of such building plan.

Ministry of works that were supposed to be carrying out oversight was practically non existent under Okorocha administration because he has confessed it to any one that cares to know that he abhors anything due process.

It is unfortunate that instead of taking responsibility for causing many havoc in the life of Imo people for 8 disastrous years, Okorocha is trying to shift blames to the shortlived administration of PDP's 7 months in government. How pedestrian and how silly?

Vanguard investigation revealed that the structure, which was still at its early stages, crumbled after the concrete beams were put in place by the contracting firm."

This was exactly how Vanguard reported the collapse of Princess Hotel in Okigwe in 2014....Below 👇is the link to the full details.

Okorocha's OCDA approved the designed, his ministry of works which was under his bedroom started the project which was the state government project... Was it also Ihedioha that caused the collapse?

In 2017, Okorocha's OCDA approved the building plan of a Hotel building project close to Newton hotel in Hospital road by World Bank in Owerri, the Hotel collapsed and killed many people.
Bellow 👇 is the link to the full story;

Was Ihedioha also the one that approved that building?

Also in 2017, 3 people lost their lives in Okorocha's OCDA approved building in Oforola: this was how punch newspaper captured it;
"Three persons were on Saturday confirmed dead when a storey building collapsed at Oforola in the Owerri West Local Government Area of Imo State."

Below 👇 is the link to the full details:
https://www.google.com/amp/s/punchng.com/three-die-in-imo-another-building-collapse/%3famp=1

In 2018, Okorocha's OCDA approved the building plan for children amusement Park Bridge opposite concord Hotel, under construction, that bridge collapsed.

Below 👇 is the link the full details.
https://www.premiumtimesng.com/regional/ssouth-east/271406-childrens-amusement-park-bridge-collapses-in-imo.html

Was it also Ihedioha that approved the building plan?

Some time in 2018 also, four people died in a building collapse approved by Okorocha's OCDA at opposite fire service in Egbu Road.

Below 👇 is the link to the full details;

Was it also Ihedioha that approved that?

There is one thing about telling the truths - it is always glaring enough for the blind to even see. Truth does not need much promotion to be seen everywhere as truths.

The truth of the matter is that most, if not all, of the building that has ever collapsed in Owerri due to structural defects were during the administration of Rochas Okorocha.

If you are to be any observant, you will take notice that they all happened between 2014 and 2020.

Meaning that these building projects were all approved by the Okorocha administration’s run OCDA between the time of 2011 they took office.

Because of the man's avowed distaste to due process and administrative rule of law in governance - they translated to the level of impunity done in his administration’s run OCDA and this explains the reasons why there were many building collapses because Okorocha's OCDA neglected due process in building approval, hence the unmitigated disaster witnessed all across town in Owerri and environs within their reigns and post Okorocha era.

In the building technology; foundations for buildings are prepared well ahead of the intended load the actual building will carry at the end of the day.

So the stories that the recent Yaradua drive 7 storey building collapse collapsed because Okorocha asked them to stop at 6th floor and Ihedioha asked them to top a pent house making it 7th floor (though there is no such records) does not add up in any technical analysis because even if it was approved for 6 floors which the Okorocha spin doctors would want us to believe; then it should be able to carry additional floors even up to ten floors because standard building specifications demand that half of the intended actual building heights should be in the building budgets in the foundation reinforcement.

Those spinning to blackmail Ihedioha with this are effectively indicting the disastrous administration of Okorocha who approved the building plans and failed woefully on their oversights.

The cause of the collapse was specifically FOUNDATION FAILURE because a building that was approved for 6 floors should be able to carry even 6 additional more floors on top, as a pent house to a sixth floor could not have altered the integrity of the original building plan.

Okorocha's spin doctors should stop dragging the innocent name of Ihedioha, and asked their master - Rochas Okorocha to apologise to Imo people for unleashing a crude, irresponsible and a disaster filled regime.