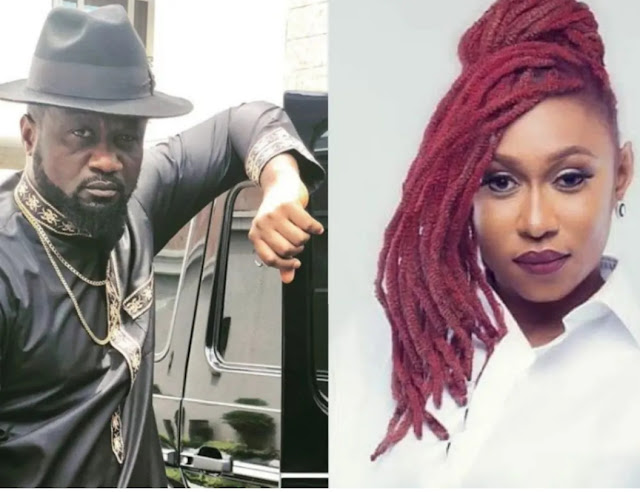 —I shot 13 videos for Cynthia Morgan, I took her VEVO account to recover my N40m’ – Says Jude Okoye

Jude Okoye has reacted to the accusations against him by his former record label act, Cynthia Morgan.
She had claimed that she lost all she had, including her name, VEVO account, Instagram account and royalties after they had some issues centering on her contract.
In an Instagram live chat with Tunde Ednut, the music executive stated that he doesn’t have the right to take Cynthia Morgan’s name because it is her birth name.
He also explained that Morgan, who has been free since 2017, changed her name to ‘Madrina’ while still signed to his record label.
Okoye also denied taking over her Instagram and Twitter account, but admitted that he took over her VEVO account, adding that it was a means of recovering over N40m he spent on her.
He further stated that he paid Cynthia Morgan’s house rent, bought her a Range Rover and even gave her money to buy a land for her mother in Benin.
He said, “I don’t understand, if she has a contract where it is stated like that, she should bring it so we can see.
“The one I have here is not different.
“How can I hold her name, which court can grant it?
“You want to do things on your own because you think you can do things on your own, then you fail and you want to put the blame on me.
“Two years after she left the label, her social media accounts were still hers, she was still going on shows behind me and she still wants to blame me for her failure.
“If she puts the blame on me, would that make her rise again?
“I have never for once told CYNTHIA MORGAN that she cannot use her name.
“I had no power to take that name, it is physically impossible to do that.
“Also, I didn’t chase her with a court injunction.
“What exactly did I do wrong? I shouldn’t have let her go when She left?
“Her contract didn’t expire before she left but I let her go.
“Before she left, she wanted to change her name to Madrina, said it means ‘Godmother of entertainment’. I only advised against it.
“I shot 13 videos, each worth N3M. I had to recover the money spent on her, so hence, I took over her VEVO account because if I don’t do so, I wouldn’t be able to get back my money.”