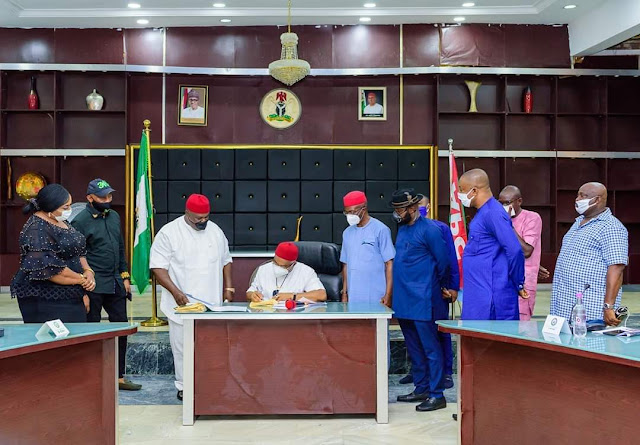 The Governor of Imo State, Senator Hope Uzodimma has signed into law two new bills on waste management and land use charges. The Bills are: “Imo Waste Management Agency” and “Consolidation of Property and Land Use Charges.”
Accenting to the Bill on Waste Management Agency, Governor Uzodimma noted that with the Law in place, indiscriminate dumping of refuse in the State and its evacuation will be a thing of the past as the offenders will be liable to heavy fines.
He further stated that waste management has become a big business all over the civilized world and that with the law in place, our waste will be converted into wealth. “Government will recycle the waste for the purpose of wealth creation,” the governor said.
Governor Uzodimma pointed out that with the law in place, ENTRACO will be entrepreneurial and creative in Waste Management disposal.
The second bill, which is on Consolidation of Property and Land Use Charges and other matters, takes care of whose duty it is to pay land and property charges.
It proposes that any occupier of land or landed property in Imo State should pay the land use charges whether he or she is the owner of the land or not as long as the occupier has been there for not less than 10 years. The law states that the owner of the land must pay the land use charges and not the occupier.
The Governor said that the law brings sanity to land acquisition and identification of land owners. He said that the law will go a long way to certify those that are legitimate land occupants and illegitimate land grabbers in the state. He further said that the law makes it compulsory for recertification of all Certificates of Occupancy (C of Os) in line with an automation process already in place. The governor said every C of O issued from the days of Michael Okpara and Sam Mbakwe must be recertified.
Governor Uzodimma assured Imolites that the days of good governance and a better tomorrow are here.
The governor thanked the Imo State House of Assembly for painstakingly working on the two bills, adding, “We will not disappoint your reasonable expectation.”
Lending his voice, the Speaker of Imo State House of Assembly, Rt. Hon. Chiji Collins explained that with the accent of the Governor to the Land Use Charge Bill, the Government has been empowered to re-certify all C of Os issued in the years past.
He noted that lands acquired especially through allocations will equally be received to ascertain their legality. He further stated that with the law in place, the forceful acquisition of people’s lands by those in position of authority without recourse to due process is over.