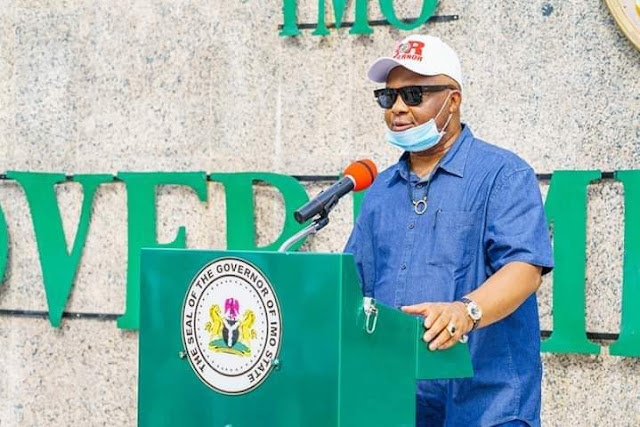 As part of measures to contain the invasion of Coronavirus pandemic, Imo state Governor, Senator Hope Uzodinma has charged security agents in the state to arrest anyone who does not have their face masks on.

The Governor gave this instruction today during a live broadcast on Covid-19 pandemic aired simultaneously on various radio and TV stations in the state.

He said it had become necessary that the protective covers are made compulsory for use since the medical experts have so far emphasized on its importance.

The Governor further directed that with effect from Sunday, 3rd 2020, all food markets shall be allowed to open, insisting that the dusk to dawn curfew as earlier imposed by the government continues without obstruction.

He said that social gatherings of more than 50 persons is not allowed in the state.

The shutdown of markets places especially at the local levels, according to him, remains and traders are further advised to continue to comply with the directives till the virus is properly put to check.

Meanwhile, he has thanked the people for their resilience and support since the lockdown, adding that it was not the government's making to frustrate them but to save them from the deadly scourge of coronavirus.

Concluding, he said, although, the state has recorded one case of the virus, the efforts so far made by the government to combat the disease was commendable.

He promised that the government will continue to live on its promises to protect lives and property of Imo people, asking for their continued support in this trying period.