Menu
Home » News » Court Rejects Ihedioha's Application for an Ex-parte Order to Stop Imo House of Assembly from Inviting or Probing him.

Court Rejects Ihedioha's Application for an Ex-parte Order to Stop Imo House of Assembly from Inviting or Probing him. 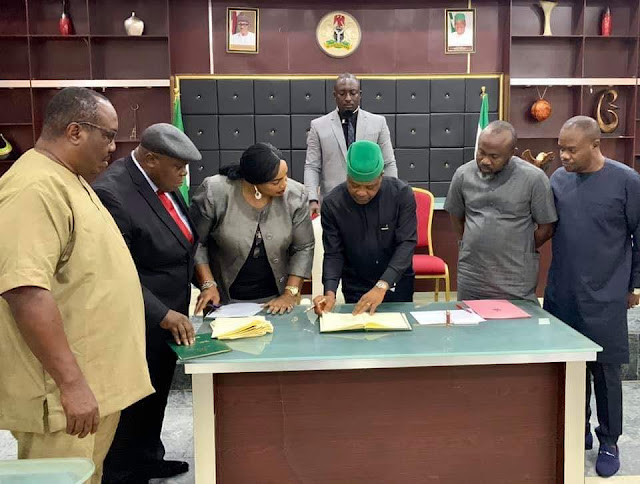 Former Imo State Governor Emeka Ihedioha on Monday  lost his bid to restrain the House of Assembly from probing the alleged mismanagement of N19.63billion council funds by his administration.
An Owerri High Court rejected his application for an ex-parte order restraining the House from inviting or probing him.
Justice S. I. Opara, in his ruling, held that rather than grant the ex-parte application, the case would be set down for hearing.
After throwing out Ihedioha’s application, he ruled that all parties must file necessary documents for hearing.
Imo Attorney-General C. O. C. Akaolisa represented the House of Assembly; S. A. Anyalewechi represented Ihedioha.
The judge adjourned till May 27 for hearing.
Read Also: Ihedioha sues Imo Assembly over probe of ‘missing N19.63b council funds’

The state Auditor-General for Local Government and Chieftaincy Affairs had issued an interim audit report detailing how N19.63billion fraudulently disappeared from the local government accounts between May and December 31, 2019.
Apparently worried that the House of Assembly may investigate the allegation, the former governor applied for a perpetual injunction restraining it from investigating him.
The House of Assembly, the Speaker and the Clerk are the defendants.
Imo State Government had on April 14 approved a request by the Auditor-General for Local Governments and Chieftaincy Affairs to recover N19.63billion allegedly misappropriated by the Ihedioha administration.
The money was allegedly taken from the State-Local Government Joint Accounts Allocation Committee (JAAC) through the Bureau for Local Government and Chieftaincy Affairs (BLGCA).
Commissioner for Information and Strategy Declan Emelumba said in a statement that the sum was discovered during a routine audit of the accounts and records of JAAC for the fiscal year ended December 31, 2019.
According to the commissioner, the money was illegally withdrawn from JAAC account without any Memorandum of Understanding (MOU), Stores Receipt Vouchers (SRV), or Stores Issue Vouchers (SIV).
Ihedioha and those named in the report had denied the allegations.