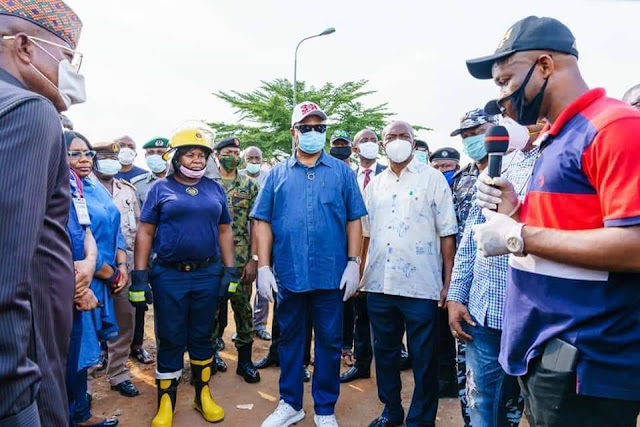 Governor Hope Uzodimma of Imo State has commiserated with the families and victims of the collapsed 8-storey building that occurred on Thursday, April 30, 2020 at Yar’Adua Drive in Owerri, promising full investigation.

Expressing his displeasure at the avoidable incident that resulted in the loss of lives and property, when he visited the scene of the incident on Friday, Governor Uzodimma warned that under no circumstance should any such structure be erected without appropriate approval, monitoring and supervision by the Owerri Capital Development Authority (OCDA) and all other agencies charged with such responsibility.

The Governor noted that the building suffered avoidable structural defects coupled with sub-standard building materials used in the construction by the engineers, which everyone can see. While commiserating with the families of the diseased victims and Imolites in general, Governor Uzodimma assured that the contractor and construction firm will be brought to book after proper investigation is conducted.

Governor Uzodimma noted: “This is a very sad event and also observe that construction work was going on against the directive for total lockdown. It’s also a very serious violation and also now to hear that the requisite approvals were not adhered to, is yet another carelessness.”

The Governor prayed for the repose of the souls of those who lost their lives and assured that the government will do everything possible to ensure that such level of carelessness does not repeat itself in the future. He added that he will make sure those behind the ugly incident are made to face the full weight of the law when investigations are concluded.

Governor Uzodimma directed that all efforts should be geared towards rescuing every life trapped in the ruins to help reduce the number of deaths while reassuring that the government cannot afford to close its eyes to “this level of negligence in the state.”

Earlier, the General Manager, Owerri Capital Development Authority (OCDA), Mr. Innocent Ikpamezie informed that a few weeks before the collapse, inquiries on the construction papers and details of approvals made to the developers were not supplied to OCDA on demand, which led to the shifting of the date of inspection to Tuesday, May 5, 2020 before the collapse occurred.

Ikpamezie thanked Governor Uzodimma for timeous intervention by ensuring that all human and material resources needed for the rescue operation were provided.