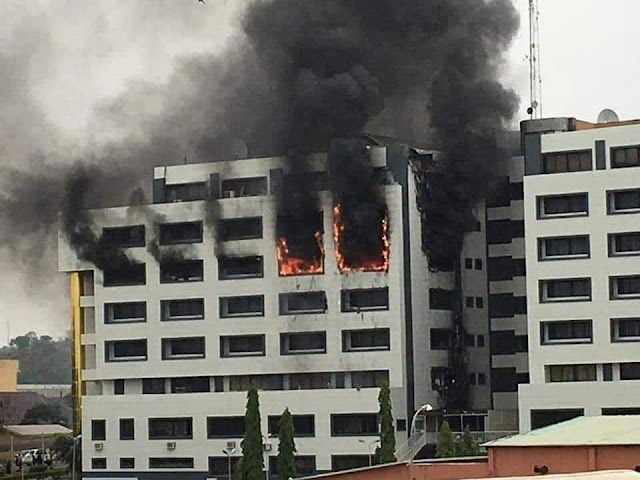 Clem Agba, minister of state for budget and planning, says the fire that gutted the office of the accountant-general of the federation (AGF) did not destroy any record.

On Wednesday, fire broke out at the Treasury House, a building housing the AGF’s office.

Officials of the Federal Fire Service and National Emergency Management Agency (NEMA) were able to put out the fire after about an hour later.

Many had alleged that the fire was an attempt to cover up wrongdoing by the federal government.

But speaking with journalists after inspecting the affected offices in Abuja, Agba said they are yet to take an inventory of what was destroyed in the fire but all the government’s financial transactions were intact.

The minister said the fire was caused by a spark in one of the air conditioners (AC) on the fourth floor.

“We have gone round the rooms and offices where the fire affected, and I am glad to report that our data Centre where all our records are kept are fully intact,” he said.

“There is no destruction, so we haven’t lost any record. As a government I want to assure you that our records are intact, a few documents are burnt, we haven’t started recovery to check what actually burnt, but all our financial transactions are intact.

“We would be doing a full scale investigation using the right professionals to determine exactly what happened.”

Also speaking, Ahmed Idris, AGF, said there would be a “thorough” investigation of the incident.

“For emphasis, our data Centre is intact, no harm in any way except for the cooling system which we are now working hard to put back to operation,” Idris said.

“We are also glad there is no casualty