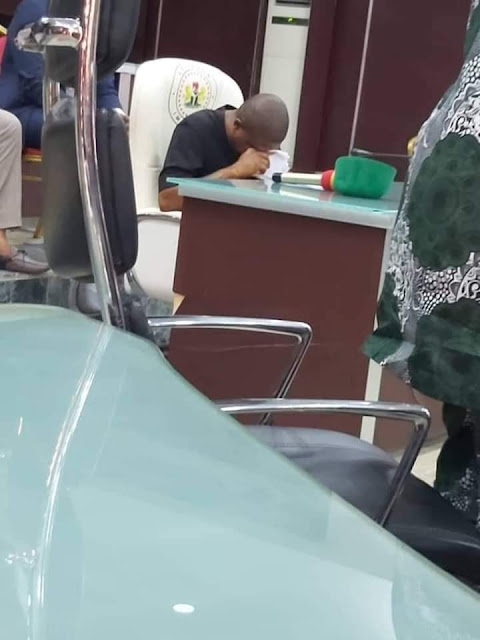 Imo state government has approved the request of the Auditor General for Local Governments and Chieftaincy Affairs, to take all necessary steps to recover the sum of N19.63Billion siphoned from the State-Local Government Joint Accounts Allocation Committee (JAAC), through the Bureau for Local government and Chieftaincy Affairs (BLGCA), by the sacked government of Emeka Ihedioha, in just 7 months in office.
The staggering amount was siphoned for undisclosed purposes.
At a press conference in Owerri yesterday the State commissioner for Information and Strategy, Declan Emelumba, said the N19.63Billion misappropriated Funds was discovered during a routine Audit of the Accounts and Records of JAAC with the Bureau for Local Government and Chieftaincy Affairs by the Local Government Auditor General for the fiscal year ended 31/12/2019.
The Commissioner said the Government's action was in line with the NEW IMO Agenda to entrench a resilient and transparent Public Service and restore financial discipline and Rule of law premised on extant laws pertaining to the Custody, Management and Appropriation of Public Funds.
According to the Commissioner, J.A.A.C. was set up by law and disbursements of L.G.A.s Funds is guided by Model Financial Memorandum and other extant laws on custody, and management and audit of the said entity.
He regretted that the money was illegally withdrawn from
J.A.A.C. account without any Memorandum of Understanding (M.O.U) or  Stores  Receipt  Vouchers  (S.R.V.)  or  Stores  Issue Vouchers (S.I.V.) in accordance with extant laws.
The Commissioner declared “Some of the agents used by Ihedioha’s government to siphon the billions of Naira include; The Managing Director of Wall House Ltd., a crony of the sacked governor, who was paid N1.215 billion for supply of construction equipment without any document, which he didn’t supply. There was also an unconscionable mandatory withdrawal of N2.405 Billion by the Bureau for Local Government and Chieftaincy Affairs (BLGCA)
Others are payment of N9.378Billion to Local Government councils for an undisclosed purpose. Also Anyama and co. received N245 Million for no disclosed purpose. Other fictitious and fraudulent withdrawals include compulsory returns or kick- backs from Local Government Councils to the BLGCA to the tune of N2.404Billion. This was deducted from the allocated funds of the L.G.A.’s.
Payment of N245Million to Raphael Anyama & Co. (Chartered Accountants) from Rural Roads Account without payment vouchers or approvals. Payments made through the banks without payment vouchers or evidence of expenditure to the tune of N3.332Billion.
Curious phenomenon where N25Million was paid  twice to the Principal Secretary to the governor in December 2019 as security vote, whereas such funds are not paid from JAAC  accounts but from state funds”.
He continued; “The state government is shocked and embarrassed that within just seven months; a government could perpetrate such quantum of fraud by an unconscionable abuse of public trust through the use of public funds for self serving purposes. Consequently the government has approved the request of the Auditor-General for Local Government to enforce his recovery order on the Permanent Secretary BLGCA and others indicted as agents used by the Ihedioha’s government to siphon the N19.63Billion
Adding that Government has immediately ordered the reshuffling of DAGs and treasurers.