Uzodinma Orders Security Agencies to Unmask Those Behind Okigwe Killing 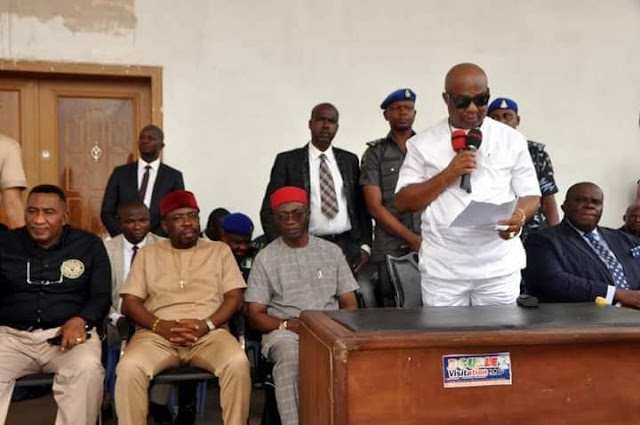 Calm has returned to Okigwe Local Government Area after gunmen went on rampage, Wednesday night, killing some persons and chasing residents into the bush.

The Governor of Imo State, Senator Hope Uzodimma who responded promptly to the incident with a visit on Friday, assured Okigwe people that government is on top of the situation, urging citizens to go about their normal businesses without any fear.

“When I heard that this ugly thing happened, I became very apprehensive, made phone calls, met with the Security Agencies and agreed to be here today to nip the problem in the bud.”

On the rumour that the attackers could be Fulani herdsmen, the Governor cautioned against fake news capable of causing disaffection.

He noted that based on the arrest made so far and the confessional statement of the suspects, it was discovered that the attack was masterminded and carried out by natives of the area.

On allegation that the Security Operatives did not respond promptly, Governor Uzodimma said: “Under my watch in Imo State, there must be security. I am aware that Security Agencies responded after the incident. They may not have responded the way you wished, but because intelligence drives every investigation, I want to announce to you that an arrest has been made and one of those that killed these people has been arrested and the telephone number of one of the victims has been recovered from him. This man is an indigene, he is from here”, the Governor stated.

Commending the Security Agencies for rising to the occasion, Governor Uzodimma charged them to get to the root of the matter and arrest the two remaining suspects who are still on the run.

While condoling with the bereaved families, the Governor promised that his administration will launch a security outfit on the 14th of March, 2020, in fulfillment of his pledge to bring criminality to a halt across the zones of the state.

Governor Uzodimma equally urged traditional rulers and town unions to help the police by providing reasonable information and at the same time ensure that the local vigilante are working very well.

Earlier, a community leader in the area and former House of Representative member, Hon. Matthew Omeogara explained that gunmen who came on a motorbike stopped at one of the eatries in the area and opened fire on the people, killing three and wounding many others. He noted that the attack was targeted at local vigilante men in the area, pointing out that the security apparatus in the area needs to be re-jigged and operational vehicles provided for them for prompt response to distress calls.

The Governor was accompanied to Okigwe Local Government by the Deputy Governor, Prof. Placid Njoku; Speaker of the Imo State House of Assembly, Hon. Chiji Collins; Secretary to State Government (SSG), Chief Cosmas Iwu; Chief of Staff, Barr. Nnamdi Anyaehie; and all the Service Chiefs in the State.