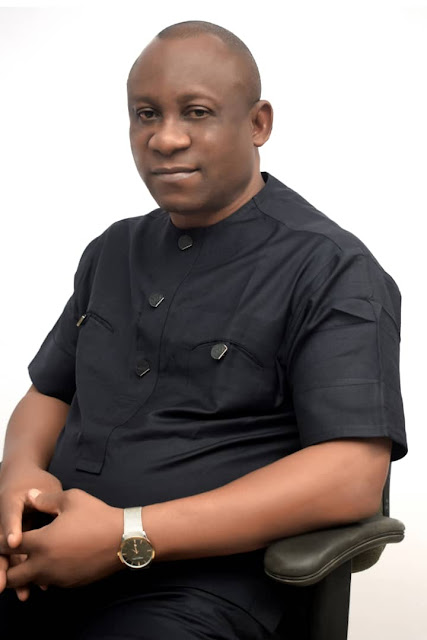 Hon Blyden Amajirionwu, a chieftain of the All Progressive Congress, APC, has called on Imolites to rally support for the administration of Gov Hope Uzodinma, Executive Governor of Imo state.  In a statement availed to IfeanyiCy Blog at the weekend,  disclosed:

"The Supreme Court Judgement of 3rd March, has brought an end to ligations on the Imo governorship case.

The stage is now set for people oriented governance as characterized in the  policies of Gov Hope Uzodinma, Executive governor of Imo state.

In delivering good governance, the government as well the people have important roles to play.

What we as the good citizens of Imo state owe the administration is undiluted and absolute support without bias. The struggle to occupy the most exalted position in the state is over to the glory of God.

To this end, we proclaim no victor, no vanquished. The victory is for all.

This is the time to play down party politics. Gov Hope Uzodinma is no more a governor of a particular political party but the governor that represents the interest and welfare of all.

He shortly after his affirmation as duly elected governor by the Supreme Court, extended Olive branch to politicians across political parties to join hands with him in the quick development of the state. This gesture speaks volume of a true demonstration of his readiness and commitment to the recovery, reconstruction and rehabilitation of a new Imo of our dream.

The new administration requires total focus. Unnecessary distractions whatsoever will hinder smooth execution of government policies directed at delivering good governance to the people. There's no doubt that past administrations delivered to  the best of their ability. But quite frankly, the economy of the state presently is reduced to its lowest ebb.

A lot of corrective jobs need to be done. Our roads are in complete bad shape, the educational standard of the state currently is nothing to write home about. Agriculture deserves more attention. Our health institutions are at a state of flux. Pensioners are owed arrears of over 56 billion naira. Civil servants are expected to be paid regularly. All these and many more are huge baggages confronting the state goverment. Like in my earlier appeal, we the citizens of the state cannot compromise our maximum support for this administration where nothing less than optimal result is expected.

Gov Hope Uzodinma for those who have come close to him will agree that he is a man with a golden heart and very easy going. Always ready to share in the views of others. There is no trace of vindictiveness or wickedness in his nature.  Neither is he an acquisition freak. It glaring that Gov Hope Uzodinma do not own such provoking palatial estates, hotels and apartments as compared to some known political leaders of Imo state origin.

His own stock in trade is largely generosity. His moderate life style is rare amongst his contemporaries.

His philanthropic gestures can not be easily equaled. At any given time, he is ever ready to give in all. It is not for the purpose of singing his praises, but of a truth, Imo has a governor with a midas touch, a kind hearted governor. Given the required support as solicited, one can truly vouch that Gov Uzodinma will not fail "Nde Imo".

He had sounded very clear in recent occasions, that rescuing the people from poverty lane is a top priority of his administration.

We as a people in assisting the government,  need to refrain from certain known norms that have continuously worked against us.

Instance include security. Most of the criminals that terrorize the state live with us, they are not strangers to our various communities. Our obligation is to identify and expose them. By so doing, criminal activities will drastically reduce and the society will be safe for all of us.

Orderliness in carrying out our daily business activities is also an obligation.

Traders selling wares on major roads in the municipality should not wait to be molested by being chased around. They should get located in stalls where they can civilly display their products. Many other vices that work against us as a society should be avoided. In doing so, the expenditure of government in these areas can be channeled to other useful purposes.

Our governor being a mortal with sins require our daily prayers to succeed. We shall continue to pray for him in the areas of God's wisdom, mercy, protection, love and direction to be able to drive the state's affairs successfully.

I also make a clarion call on all clergy as a sacrifice to dedicate Imo back to the hands of God. This dedication I suggest should be the absolute responsibility of men of God of Imo extraction. The will of God is the most desired at this trying time" the statement reads.