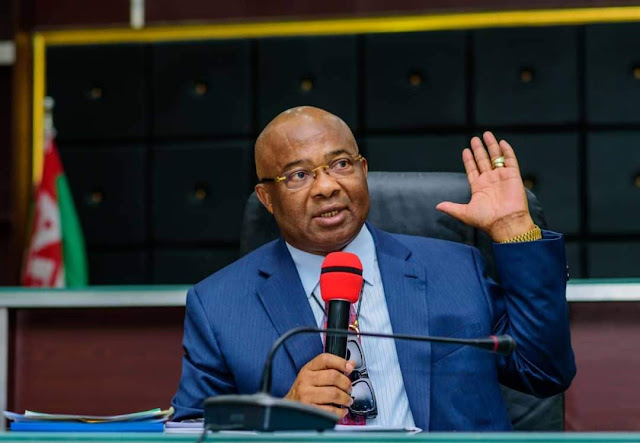 Imo State, Governor Hope Uzodinma, has stated that his government has zero tolerance for corruption, stressing that any appointee or top government official found defaulting will be dealt with lawfully.
Disclosing this during the flag off of  three-day retreat for the  new political appointees and top government functionaries with theme "Re energizing Imo towards sustainable development, a  collective action,held at Concord Hotel, Owerri, on Thursday.
According to Uzodinma, Imolites are desirous to see positive performance from his administration, adding that they can not afford to fail.
" You are now in government and no longer in private life, buy into the genuine service and visionaries of this administration.
Our government has zero tolerance for corruption, any of you found guilty of corruption will not only be removed but handed over to the Economic Financial Crimes Commission,EFCC". He stated
Furthermore stressed that the essence of the retreat is to give the appointees and top government functionaries a foresight about the policy objectives of his administration, urging them to see themselves as members  of "Team New Imo" apostles of shared prosperity, adding that they were chosen on merit base on their commendable pedigree.
A participant Mrs. Amaka Okafor, Special Adviser to the Governor on New and Electronic Media,expressed satisfaction with the retreat,opining that the whole essence is to digest the strategic vision of the government so as to have a road map to achieve the needed goal in Imo State.
The Governor is expected to inaugurate all appointees on Monday 23, March,2020, at Ahiajoku event centre Owerri, Imo State.