Ihedioha as an ‘unrepentant sinner’ 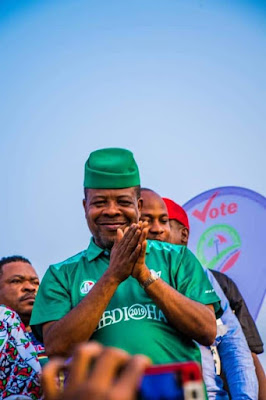 What recommended one of the thieves crucified with Jesus for salvation was his immediate repentance. While his colleague was still deriding Jesus and mocking him to save Himself, the wise thief quickly acknowledged his sins and asked Jesus for forgiveness. His salvation became instant.

Every Christian is not only familiar with the story, but its import. Obduracy leads to hell. Hard-heartedness leads to perdition. Inability to give up even when the game is clearly up, suggests mental insanity. And above all, arrogance, couched in public service is repugnant in the face of multiple choices before people. The bitter truth is that no single man or woman is indispensable. Anybody who thinks otherwise is just playing God. And we are aware of the fate that awaits such foolish people.

That is why it is most painful and disturbing that Rt. Hon. Emeka Ihedioha, the defeated candidate of PDP in the last governorship election, has remained adamant in his elusive quest to rewrite history. While he is at liberty to continue to live in self-denial, must he also deceive some Imo people that he is a classical hero now cast in the mould of a messiah that is waiting to come in chariots to save them? Even if Ihedioha refuses to wake up from this bad dream of wishing that he remained governor even when reality speaks loudly otherwise, must he destroy his political future and sacrifice the happiness of others on the altar of blind ambition and selfishness?


Reading through the hate speech he authored in the name of a response to the Supreme Court verdict that finally and irreversibly nailed his governorship ambition, I came out with this eerie feeling that Ihedioha must be saved from himself. To arrogate to himself such an emperonic standing when it is obvious that Imo people had since moved on with the leadership of Governor Hope Uzodinma could only suggest that there is a very thin line between delusion and insanity. What separates a statesman from a rabble-rouser is nothing, but reason, the ability to know when it is time to surrender. However, it does appear that Ihedioha is a poor student of history who would rather play the ostrich than accept that the contest for the governorship of Imo State for 2019 is over in favour of Senator Uzodinma.

When the late Ibrahim Waziri advocated politics without bitterness prior to the 1979 presidential election, I believe he was talking to the likes of Emeka Ihedioha. The founder of NPP, Waziri was displaced by Nnamdi Azikiwe for the party’s presidential ticket. He did not even weep; talk less of taking action against his traducers. He quietly went back to FEDECO and registered another political party called GNPP. When he lost the presidential election, he was the first out of the four to congratulate President Shehu Shagari. That was a statesman. Today, his legacy still leaves on because he didn’t allow self-interest to obfuscate his patriotism and integrity.

But when somebody believes that he must always win at the expense of others, then something is inherently wrong with his mindset. It may be necessary to take Ihedioha back to the events leading up to the 2003 general elections. Stakeholders of PDP in Aboh Mbaise/Ngor Okpala Federal Constituency of Imo State had agreed that the position of House of Representatives member will rotate between the two local government areas. It was on the strength of that that Hon. Greg Egu did not seek re-election in 2003. At the primaries, Gregory Dikeocha who later became Speaker of the Imo State House of Assembly defeated Ihedioha at the primaries. He refused to accept defeat. Instead, he ran to Vice President Atiku Abubakar who prevailed on the party leadership to give Ihedioha the ticket. All of us know how he “won” that election.

But the shocker was that after serving one term, which was agreed in the power sharing principle, Ihedioha refused to step down. He became the proverbial monkey that took the drinking cup to the treetop, refusing to relinquish it. Employing subterfuge, blackmail, intimidation and all forms of political jiggery pockery, Ihedioha went back for a second term in 2007. Did he give way in 2011? No. He stayed put in the House for 12 years. What manner of man does that, repudiating agreements and appropriating onto himself what belongs to others? Some call it greed. But Ihedioha believed it was political correctness because he was the beneficiary.

Those in PDP are aware of what happened in the governorship primaries of 2015 and 2019 that produced Ihedioha as flag bearer. Senator Ifeanyi Araraume is alive to testify how Ihedioha used federal might to intimidate delegates and how the actual contest was rigged in his favour. He employed the same underhand tactics in 2019, muscling out Senator Sam Anyanwu who was clearly the favourite during the primaries. In both occasions, Ihedioha rejoiced not minding the crooked method he used to maneuver his way through. Because he was “born to rule”, all became fair and well in the game of love and war.

However, electoral fraud has an expiry date which slender back is soon broken by reality, truth and vigilance. At the 2019 governorship election, Ihedioha like an old dog, held on to its old tricks. In just three local government areas of Aboh Mbaise, Ahiazu Mbaise and Ezinihitte Mbaise, he produced magical figures with which his comrade-in-crime, Prof Francis Otunta of Michael Okpara University of Agriculture, Umudike, declared him winner in violation of the constitution and the Electoral Act. Ihedioha knows he did not win the election. He knows he did not meet the constitutional spread. Above all, he knows that by conspiring with INEC to exclude results won by Hope Uzodinma in 388 polling units, he was just buying time.

Yes, while Ihedioha pretended to the world that he won an election he couldn’t deceive his conscience that he won any election. That was why  he sent several delegations, traditional rulers and members of the clergy, to beg Sen. Uzodinma to withdraw his case from court and name what he wanted as his share in government. I know this because some of those he sent tried reaching the Senator through me.

It is clear to me that Ihedioha is angry and even frustrated that nemesis has come knocking on his door too early.  But he did not help himself when he quoted Dele Giwa in his hate speech about evil not escaping punishment either by man or by God. Incidentally, this quote appropriately applies to him because it is the cumulative serial electoral evil that he has committed in the past that he is being punished for, both by man and God.

It is inconceivable that a man who had committed an electoral heist of that magnitude could still turn around to expect justice from the highest court of the land. That he could manipulate the electoral tribunal and even hoodwink the Court of Appeal, minus one justice, never meant he could pull wool over the eyes of the Supreme Court justices. It was even as well that he sought that review because it afforded the justices another opportunity to reaffirm what we already knew that many days can be for the thief, but one glorious day belongs to the owner of the house.

Ihedioha’s pontification of pursuing “the struggle for Imo people” is nothing but hot air. His tears are those of the crocodile. It is one thing being arrogant, it is quite another being selfish and self conceited. Ask the people of Mbaise outside his native Uvuru clan what they benefited from Ihedioha’s 12 years in the House of Representatives. Ask his immediate community why they went up in arms against him when he sought to relocate them from their ancestral land to expand his palatial home as governor. Does that cut the image of a liberator? Nobody should be deceived. Ihedioha is inconsolable over a personal loss. If indeed he believes in group and class interests, not to talk of general one, he should have long conceded defeat and waited for his turn another day. But because he believes he has the monopoly to power, Ihedioha has made himself a running mate to that unrepentant thief crucified with Christ.