Menu
Home » Opinion » EMEKA IHEDIOHA AND THE POLITICS OF HOMECOMING

EMEKA IHEDIOHA AND THE POLITICS OF HOMECOMING 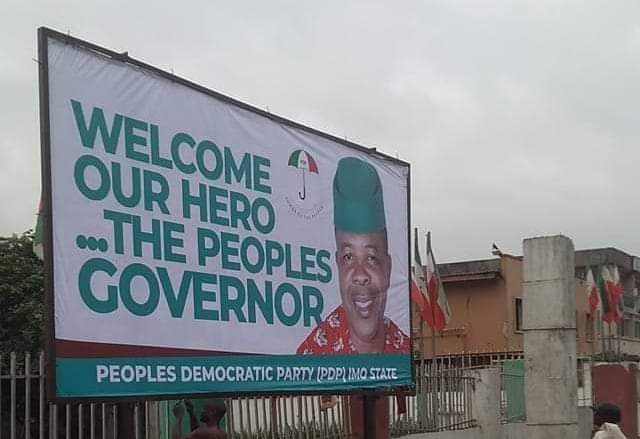 The impression given out in the media exchanges by former Governor Emeka Ihedioha and his party, the People’s Democratic Party (PDP) over his aborted homecoming on Thursday, March 12, 2020, is that he is being victimised for the political exigencies of the incumbent Governor Hope Uzodinma. The former Governor and his handlers go on to make the impression that he has been exiled from the state by the incumbent government. This spurious claim was reinforced by the State Secretary of the party, Hon. Nze Ray Emeana, on Channels TV’s Sunrise Daily programme on Friday morning, March 13, 2020. He claimed, among other things, that Ihedioha was banished from the state.
The true position of things on the ground in the state does not agree with the mind-game as played by the PDP and the former Governor. This has been reiterated by several commentators in the state and beyond who insist that the PDP may be playing to the gallery with their bogus claim of banishment. Even among the chieftains of the PDP, there is sharp disagreement on the claim. Some say that the party hierarchy played into the hands of their opponents, the state government and the All Progressives Congress (APC). Others say that the arrangements for the return of their leader was mismanaged by the party hierarchy and some other interests.

It is common knowledge that the former Governor was billed to return home after being away for close to two months, since January 14, 2020 [He left actually on 12 Jan]. The party and his supporters decided to give him a heroic welcome. We do not think that anyone would ordinarily have a problem with any sort of welcome given to anyone, especially a former Governor. But in this instant case, while the plans for the heroic welcome was going on, the police in the state said they had intelligence report that “some group of persons have concluded plans to use the intending return/visit of Rt. Hon. Emeka Ihedioha to Imo State on Thursday 12/3/2020, to foment trouble and as such cause breach of public peace in the state”.

We presume that the state government, through its own intelligence gathering mechanism, might have got the same or similar intelligence report. In a press release by the Chief Press Secretary/SA Media to the Governor, Mr. Oguwike Nwachuku, on Wednesday, March 11, the state government said that they were “aware of plot *_(sic)_* by the People’s Democratic Party (PDP) in the state to stage protests tomorrow, Thursday, during which they will again pour insults on the Supreme Court Judges for refusing to reverse their earlier judgment on the Imo governorship case”. Mr. Nwachuku added that “The government is fully aware of the plan by the PDP to hide under the guise of welcoming ousted Governor Emeka Ihedioha back to Imo to stage the protests. Their plan is to make it look like Imo people trooped out to welcome him and hide under that cover to display placards condemning the Supreme Court Justices for refusing to reverse their judgment in favour of Ihedioha and the PDP….From the airport they plan to proceed to Owerri, the state capital to continue with the protests….Government is also aware that they have imported thugs from neighboring states for this purpose because the few members left in their ranks cannot make the impact they crave for.”

It is our consideration that no serious minded government or governor would ignore serious intelligence pointing to possible breakdown of law and order. It behoves the governor, as the Chief Security Officer of the state, to act in such a manner as to maintain public peace and further secure the lives and property of the citizens of the state. But did Governor Hope Uzodinma banish Ihedioha from the state? Did the police ban the PDP and their supporters from receiving their leader? Evidence points to the contrary. Instead of behaving arbitrarily, the state government rather called “on the security agencies to take note of this devilish plot by Ihedioha and the PDP and take necessary steps to ensure that there is no breach of peace (sic) in the state”. Furthermore, the state government reiterated the fact that “Imo people cherish the peace which the coming of Governor Hope Uzodimma has brought to them and will not take kindly any act geared towards truncating it, more so if such acts are deliberate”.

With a Governor that has high democratic ethos, the state government added that it would “no longer tolerate unbridled affront on constituted authorities in the name of the exercise of freedom of expression”, noting that “There must be an end to every litigation and that of Imo governorship tussle which came to an end on 3rd March 2020 cannot be an exception.” The State Police Command on its part did not take lightly the intelligence report available to it. Speaking through its Public Relations Officer, SP Ikeokwu Godson Orlando, the Imo State Police Command on Wednesday banned rallies and assemblies in the state, saying: “there should be no rally, gathering or assembly of any kind in relation to the visit”. It stated that the reason for the ban on rallies and assemblies was “to avoid such [the return/visit of the former Governor] being hijacked or used by mischief makers to cause, or such rallies, gathering or assembly snowballing into breach of peace (sic).” The police also warned the supporters of both the PDP and the APC, the former Governor and the incumbent to maintain decorum and law and order.

In spite of the foregoing, there are complaints in the media as to how a reception for a cherished leader by his people could become violent or disrupt peace and order in the state. We have also read that the PDP claimed that it had organized protests before and did not take to violence. We consider the ensuing scenarios leading to the aborting of the return of the former Governor and its attendant squabbles, to be a case of the witch crying at night and the baby dying at dawn. Several persons have pointed at a number of scenarios. For example, the state government quoted a statement made by the former governor recently. “From the statement released by Ihedioha after the refusal of the Supreme Court to reverse its earlier judgment, where he said that the Judges of the Apex Court will not go unpunished, it was obvious that he was still up to some mischief. This planned protest is only part of it”, said the APC. They point at another scenario, saying that on Wednesday, March 4, then Secretary to the Government of Imo State, Hon. Uche Onyeagucha, in an interview on Channels TV’s Politics Today, vowed that the PDP, Ihedioha and their supporters would not recognize Uzodinma as the Governor of Imo State, describing him as “a Supreme Court-imposed Governor of Imo State”, adding "that is what he would remain for the period he would be in office”.

There is also the issue of creating two governors in the state at the same time, a kind of putting two captains on one ship. The PDP had mounted large billboards where it boldly described Ihedioha as the People’s Governor. To make the matter worse, during his appearance on Channels Television’s Sunrise Daily on Friday morning, the State Secretary of the party, Nze Ray Emeana, for more than five times, referred to Ihedioha either as The Governor, The People’s Governor or Our Governor. He added that though Uzodinma was imposed on the state by the Supreme Court, the people of the state were free to choose their Governor. These scenarios, coupled with the police intelligence and the allegation that some thugs were hired, was enough for the police to stop rallies and protests.

On the other hand, some people claim that the PDP has forgotten recent history. They argue that the party wanted Governor Uzodinma to accept what they did not accept when they were in power in the state. According to this school of thought, following the activities of the assets recovery team set up by Ihedioha and the skirmishes that accompanied it, Ihedioha’s predecessor, Owelle Rochas Okorocha, had returned to the state on Tuesday, August 20, 2019, and addressed his supporters. He was quoted in the media to have said that he was giving Ihedioha what he termed the last warning over his “intimidation of Imo citizens”. According to the vanguard newspaper of Wednesday, August 21, 2019, Okorocha said: “I have returned back (sic). Everywhere will be calm. It is time to know who is stronger. You think I am not hearing what is happening. I am hearing but I just keep quiet. I hear how they are destroying my projects. It is not my fight. It is the fight of God (sic)”.

The state government then led by Ihedioha did not take lightly the reception given to Okorocha and the statements he was quoted to have made. The next time Okorocha was billed to return home was on Friday, August 30, 2019. The PDP and the state government mobilized thousands of youths to the Sam Mbakwe Airport. The crowd led by the then Secretary to the Government of Imo State, Hon. Uche Onyeagucha, arrived Sam Mbakwe Airport by 10aam, and stayed up to 2pm waiting for Okorocha’s arrival. Okorocha deferred his return but never claimed banishment.

Addressing the mammoth crowd at the airport, Onyeagucha said: “We heard that Rochas said he was coming to Imo State today. That was why we asked you all to come together, ka kpokirikpo gbaa n’ihu n’ihu” [an expression suggesting violent confrontation]. We are proud of the way you responded. We directed each local government chairman to come with his people. We have waited for him till 1pm. But we cannot postpone this fight. We are aware that he might have boarded a flight going to Enugu, Port Harcourt or Asaba. But that won’t save him. If he likes let him run to Ogboko, we will pursue him to Ogboko. If he likes let him run to Spibat, we will pursue him to Spibat. If he runs to his house beside Concorde Hotel, we will pursue him to that place. What we are sure of is that he must leave Imo State, so that we would rebuild it for keke drivers, okada riders, civil servants and traders, youths, children, the aged and pensioners - and for even the dead. But since we have waited till now and he hasn’t returned, I want to beg you, the matter is not over yet. I want all of us to go back home. We will proceed to IICC. We will sit there and wait, to find out whether he had diverted to Port Harcourt, Asaba or Enugu, in order to come by road. But by whatever means he is coming, once we get the information, we will pursue him to that place. Even if he is in a hotel, we will meet him there (sic)".

*Collins Ughalaa could be reached via email: ughalaacollins@gmail.com, or via telephone: 07066222944.*
Posted by IfeanyiCy Njoku
Labels: Opinion