'No person or authority can armtwist, browbeat, intimidate or harass the Supreme Court'... Prof Obiaraeri 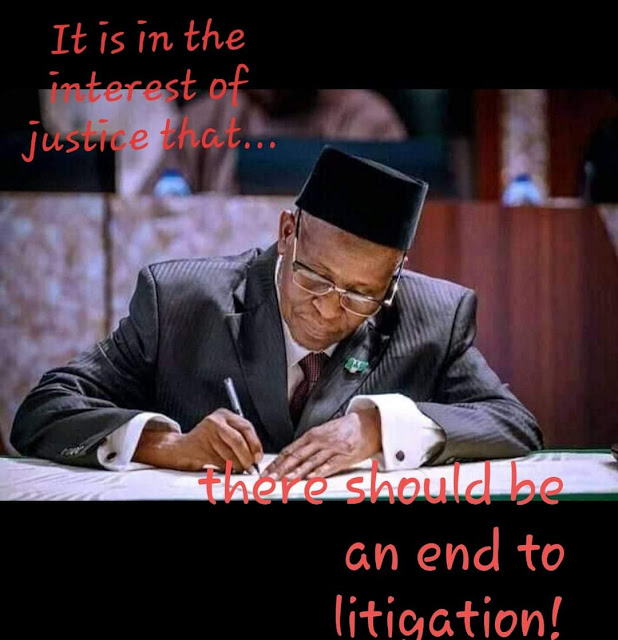 The recent application for review filed in the Supreme Court Registry by PDP and her sacked Imo guber candidate over the 2019 Governorship election is being grossly misunderstood in certain quarters particularly within the partisan ranks of those that would want the Supreme Court to overrule itself in that matter even when the judicial calendar for adjudication im electoral cases has formally closed and notwithstanding that it was a considered unanimous judgement of the full court of seven Justices of the Supreme Court.

This 2019 Imo Governorship case is one of the many high profile political cases handled on a final appeal at the Supreme Court and it was disposed of by the apex court on 14 January 2020.

In that ground-breaking unanimous judgement, the Supreme Court sacked the PDP Governorship candidate from office while the APC Governorship Candidate was declared lawful winner and ordered to be sworn into office as Governor of Imo State.

Consequently, the APC Governorship candidate has since 15 January 2020 been sworn in as Imo Governor by the Chief Judge of Imo State in obedience to the final decision of the Supreme Court.

The law of the land requires all parties embroiled in a dispute in court to accept the final decision of the highest court in the land as appeals lie from the Supreme Court to no where else.

However, politicians being incurable optimists by nature will not mind asking for the impossible including applying all manner of subterfuge to secure power via the polls or seeking judicial reprieve through the back door even when there are no valid, cogent and legally sustainable grounds to do so.

Shortly after the Supreme Court judgement in the Imo Governorship case, instead of accepting the final verdict in line with the tenets of rule of law, the applicants in this matter, contrary to established civilized norms, resorted to all sorts of demeaning antics ranging from street protests to openly scandalizing the judiciary and pouring unprintable umbrage and invectives on the Justices of the Supreme Court.

For the records, the Supreme Court is a public institution and its Registry is open to members of the public.

It is therefore no big deal to get a date fixed for consideration of an application filed for a review of a judgement which the Supreme Court has decided with finality.

What is the big issue is whether the Supreme Court will countenance the prayers or reliefs sought in the application for review.

We dare say that with this application now listed on the cause list of the Supreme Court, it signposts the beginning of the many stringent hurdles the applicants will be required to surmount as a precondition for getting the Supreme Court to agree to review and or and overrule itself in a judgement it has conclusively determined.

Thus, it settled that the filing of the application and consequential fixing of a date to consider the said application for review does not amount to an automatic review of the judgement already done and dusted.

They also have the onus of satisfying the Supreme Court on the propriety of the application they brought for review in view of the settled law that a disposed case by the Supreme Court has come to a dead end or final bus stop.

In addition, this Imo Governorship case being an election petition matter that is *suis generis* man and time sensitive, the applicants must show good cause why the Supreme Court should reopen the case it is now *functus officio* and may not be lawfully entitled to reopen by reason of effluxion of time, the sixty days allowed under the Constitution for election petition appeals before the Supreme Court having long expired.

It is settled law that the issue of sixty days constitutional timeline for conclusion of election petition appeals in the Supreme Court is a  grave constitutional question and the courts do not answer them lightly.

The above are among the compulsory things the applicants must satisfy the Supreme Court before talking about the merits or demerits of the review proper which will require them among other things to convince the Supreme Court that the unanimous judgement of the full court of seven justices were in patent error requiring rectification.

In view of the foregoing, the innocuous concluding point must be made that unlike the propaganda out there, it is not yet uhuru for the applicants as the Supreme Court is not yet reviewing their unanimous judgdment declaring His Excellency Senator Hope Uzodinma of APC winner of the 2019 Imo Governorship election.

The Supreme Court seldom overrules itself although it has power to do so.

Nigerians and the legal community are optimistic that the Supreme Court is more than able and capable to resolve all issues, constitutional and otherwise, raised in this application.

The other street talks that international observers drawn from EU, UN, AU, World Court, ECOWAS Court and the rest of them will be present to watch or is it supervise the Supreme Court proceedings in this matter are laughable and can only be dismissed as idle and ignorant propaganda.

International and local observers are welcome to attend the proceedings (or any others for that matter) but their presence or otherwise in the Supreme Court will never impact on the outcome of the application which can only be decided based on Nigerian law and as interpreted in the infinite wisdom of the Supreme Court.

No person or authority can armtwist, browbeat, intimidate or harass the Supreme Court into going against the Constitution and laws of Nigeria.

Justice will always be done and the heavens will not fall.

Let all concerned be properly advised lest we get it twisted.

A new normal is possible!