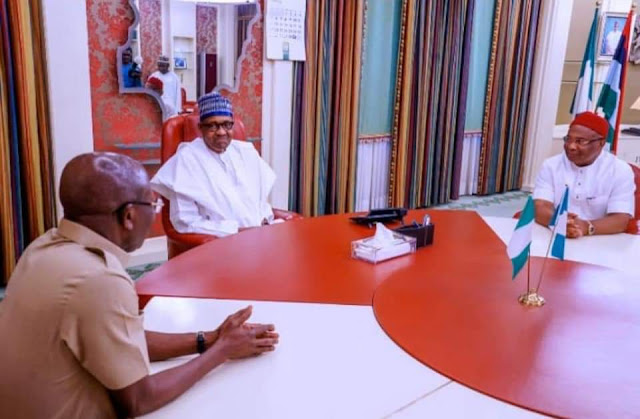 President of the Federal Republic of Nigeria, Muhammadu Buhari has invited the Governor of Imo State, Senator Hope Uzodinma as a member of top federal government delegation that will join him to attend the Thirty-third (33rd) Ordinary Session of Heads of State and Government of the African Union (AU) in Addis Ababa, Ethiopia.
President Buhari who will depart Abuja Friday, February 7th, 2020 will join leaders from the 55-member countries of the African Union to participate in the Summit with the theme, “Silencing the Guns: Creating Conducive Conditions for Africa’s Development.”
The President will attend the 29th Forum of Heads of State and Government of Participating States of the African Peer Review Mechanism (APRM) and the 27th Session of New Partnership for Africa's Development (NEPAD) Heads of State and Government Orientation Committee (AUDA-NEPAD).  The meetings will precede the 33rd Ordinary Session of the Assembly.
In Nigeria’s capacity as a member of the AU Peace and Security Council, President Buhari will participate in the High Level meeting of the Peace and Security Council on the situation in the Sahel and Libya, and High Level Ad-Hoc Committee on South Sudan.
On the margins of the Summit, the President will deliver a keynote address at a High Level Side Event on “Stop the War on Children: Dividend of Silencing the Guns.” The event is co-sponsored by the Governments of Nigeria, Uganda and Norway, and Save the Children International.
President Buhari and the Nigerian delegation will also participate in other High Level Side Events in furtherance of Nigeria’s national, regional and international goals, priorities and aspirations namely, peace and security, countering terrorism and violent extremism, economic development, asset recovery and fight against corruption.
The President will also hold bilateral meetings with several world leaders on the margins of the Summit.
At the end of the AU Summit on February 10, the Nigerian President will commence a State Visit to Ethiopia on February 11, at the invitation of the Ethiopian Prime Minister, Dr Abiy Ahmed.
The visit according to a press statement made available to IfeanyiCy Blog and signed by Garba Shehu Senior Special Assistant to the President on Media and Publicity is aimed at strengthening bilateral ties between Nigeria and Ethiopia and reinforcing cooperation in key areas of mutual interest between the two countries.
Before returning to Abuja, President Buhari will also interact with the Nigerian Community in Ethiopia.
The President will be accompanied by Governor Hope Uzodinma of Imo State; Governor Ben Ayade of Cross River State; Senator Adamu Mohammed Bulkachuwa, Chairman, Senate Committee on Foreign Affairs; and Hon. Yusuf Baba, Chairman House Committee on Foreign Affairs.
Others are: Minister of Foreign Affairs, Geoffrey Onyeama; Minister of Aviation, Hadi Sirika; Minister of Industry, Trade and Investment, Otunba Niyi Adebayo; Minister of Defence, Major-Gen. Bashir Salihi Magashi (Rtd); Minister of Information and Culture, Lai Mohammed; and Princess Gloria Akobundu, National Coordinator/Chief Executive Officer,  NEPAD Nigeria.
Also on the President’s entourage are, the National Security Adviser, Major-Gen. Babagana Monguno (Rtd), and the Director-General of the National Intelligence Agency (NIA), Ambassador Ahmed Rufai Abubakar.
President Buhari is expected back in Abuja on Wednesday, February 12, 2020.