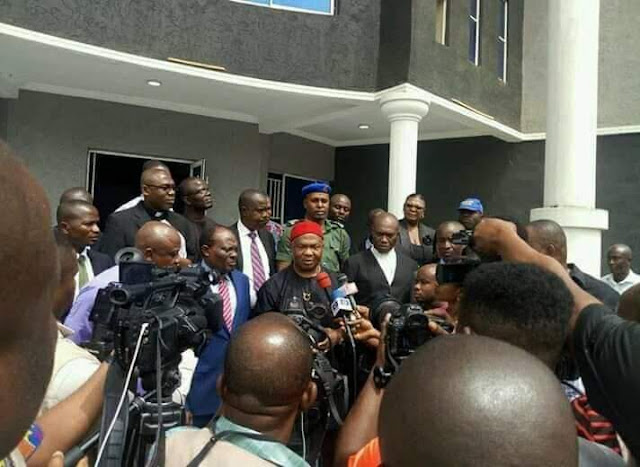 Imo State governor, Hope Uzodinma, Tuesday announced that he has forfeited his security vote to enable him to meet up with the economic challenges in Imo, especially the payment of salaries and pension in the state.
The governor spoke when he met with the Imo Economic Development Initiative, led by Professor Maurice Iwu, at government House in Owerri, adding that he took the decision because of the paucity of funds issue before his administration.
He also revealed that his next plan was to establish power and petrochemical plants, to boost electricity supply in the state.
Other plans of Uzodinma are to review the 2020 budget passed into law in order to address the current problems militating against development in the state.
According to the statement, by his Chief Press Secretary, Oguwike Nwachukwu, said: “Imo State Governor, Senator Hope Uzodinma has stated his vision to establish power and Petrochemical plants to enable the state take advantage of the huge oil and gas deposits in the Ohaji/Egbema/Oguta axis.
“Governor Uzodinma noted that industrialization cannot thrive when power is epileptic, assuring that a power plant is top on his agenda.
“Only the best brains shall be appointed to serve in my cabinet; Governor Uzodinma used the opportunity to announce the forfeiture of his Security Vote in view of paucity of funds and to ensure that workers and pensioners are paid promptly.
“We are reviewing the budget earlier passed by the state House of Assembly with a view to streamlining it with current realities.
“The Governor, for instance, further cited the building of 27 stadia across the 27 LGAs, saying that the funds could have been applied more meaningfully to benefit the people.”
He pointed out that “On his intention to run an open and transparent administration, Governor Uzodinma disclosed that Town Hall meetings are to hold at the various councils where stakeholders shall brainstorm to identify their real needs.
“The Governor also announced plans to launch a special security outfit to smoke out criminals, revealing that over 100 vehicles have been procured for the purpose. In his words, a “new Sheriff is in town and I must deliver.”
Iwu’s message to the governor that “Our group is prepared to partner with Governor Uzodinma on how to seek funds in view of limited resources available in Imo.
“The members described Governor Uzodinma’s emergence as “victory for the state and that the time to implement governance is now as the period of electioneering is over.
“It is not as an accident you are governor, we have four key areas for Governor Uzodinma’s critical attention harnessing of the gas potentials of the state, exploration of Information and Communication Technology, Enhancement of Internally Generate Revenue and Embracing of Imo Diaspora citizen.
“The Imo Economic Development Initiative comprises notable Imo citizens in business from the Academia and Public Service and Entrepreneurship articulates ideas aimed at attracting development projects to the state.”
– Vanguard
#IfeanyiCyMedia #IfeanyiCyBlog #EventCoverage #EventPlanning #EventManagement © Ifeanyicy.com