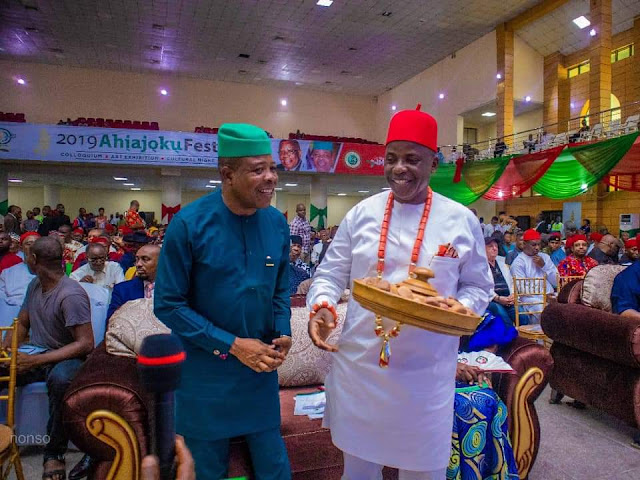 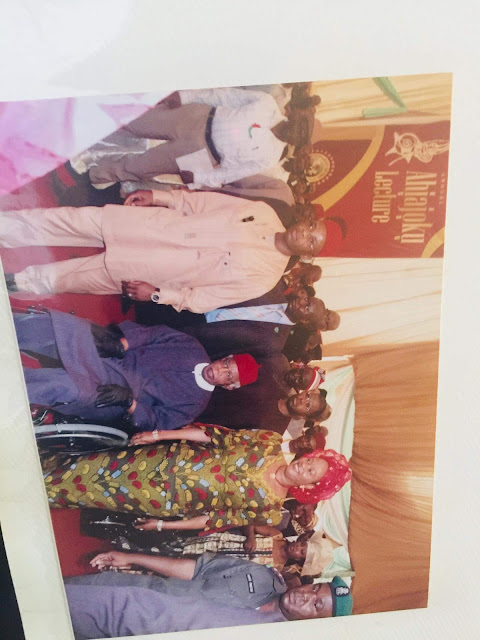 PROTOCOL:
It is from the depth of my heart that I welcome all our distinguished guests to this epoch-making event, being the 40th anniversary of the Ahiajoku lecture series. When I was asked by His Excellency, Rt. Hon. Emeka Ihedioha, the  governor of Imo State, to chair the Planning Committee for the 2019 lecture, I immediately found myself in a very emotional situation. Firstly, as governor of the State, I presided over the 30th anniversary of Ahiajoku lecture with Prof. Chinua Achebe, the eagle on the Iroko, as the lecturer. That request by the Governor therefore invoked in me the memory of our late literary icon, Chinua Achebe. Incidentally, Achebe's visit to Nigeria to deliver that lecture in 2009 was his last to his fatherland, before his untimely death in 2013. (Call for one minute silence). Secondly, the mere realization that no other Ahiajoku Lecture has been held since nearly eight years, in spite of the efforts we made to reposition the lecture series, made me quite sober, and sad.

Your Excellency, Governor Emeka Ihedioha, you made a profound statement to me when both of us sat down to discuss the way forward. You said, that the most important challenge posed to my Committee was how to cover the lost grounds. In other words, how to re-galvanize the interest of Ndigbo, and other indigenes of the old Eastern Nigeria, nay all Nigerians, in this important lecture series following the eight years' lacuna. As you are aware, the Ahiajioku Lecture series was put in place 40years ago by yet another illustrious son of Igboland and indeed Nigeria, the late Dee Sam Onunaka Mbakwe of blessed memory to address a felt need, very close to the heart of our people. My Committee therefore quickly summoned courage to move ahead; more so after the very reassuring words from Your Excellency that you were yourself  personally committed and poised to put the lecture series in a stead to realize the objectives for which it was originally set up. 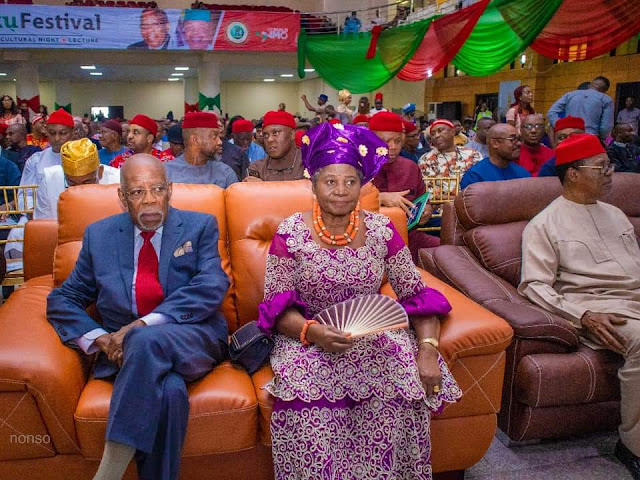 Let me, therefore seize this opportunity to say a big thank you, on behalf of the Committee for not only ensuring that the materials needed for this assignment were provided, but also, and more importantly, giving the moral support and showing in no little measure the mental fecundity and robustness to host and hoist an intellectual harvest of this nature, in spite of the humongous economic and political challenges you  inherited.

Let me also appreciate you our Governor, on behalf of Ndimo, Ndigbo and Ndi Eastern Nigeria for the bold steps you have taken thus far. You have demonstrated that your words are truly your bond.

One important assignment the governor gave to the Committee therefore, was that the Ahiajoku Lecture series should hence forth be repositioned to transcend the ambience of Igbo nationality; to now become a platform for the entire people of the former Eastern region. To the ordinary mind, this may look like a tall order, especially when placed against the backdrop of an exogenously propelled lack of political intimacy between the Igbo and their brothers and sisters in the other four States of the former Eastern Region outside the South-East since after the civil war. 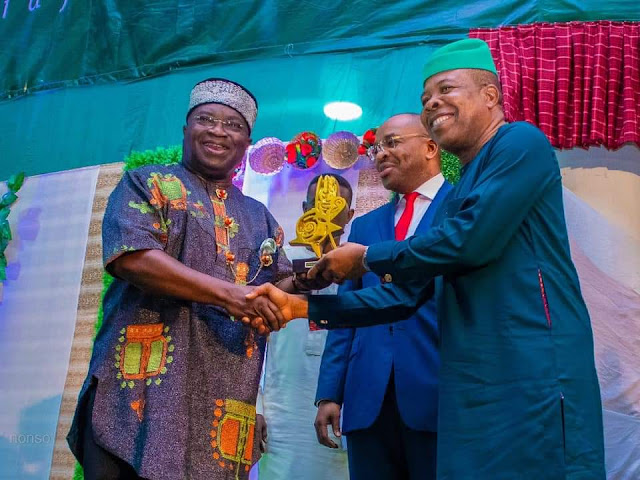 But Mr. Chairman, Your Excellencies, our respected elders, and all other distinguished guests, the truth is that we are one people. Throughout history, the most common parameter for measuring the oneness of a people is common Historical Experience and antecedents which Ndigbo and their brothers and sisters in Ibibioland, Efikland, Kalabariland, Ogoniland, Ijawland, etc have shared in the period before, and between 1967 and 1970 and indeed, have continued to share till date.

Ladies and gentlemen, while there is no intention here to invoke ethnic sentiments or dichotomy the idea is to promote and underscore the fact that even though we now have things like Rumokoro instead of Umuokoro; and Rumola instead of Umuola; the people concerned know very well that they are one, with their brothers and sisters in Nnewi, Asaba, Owerri, Abiriba, Ogboloafor, Abakaliki Itigidi, Obubra, Ika, Oshimiri, Ndokwa, Aniocha, Osekwenike, Abuefo, Isobo, Abi Ikot Udo Ika, Umuezeoka and Amaezekwe in Benue State etc. This is evident from my findings when in the course of this assignment, I visited some political leaders in the states outside the South-East to invite them to this lecture and intimate them of the lofty idea of making the Ahiajoku lecture series a pan Eastern Nigeria affair. The good news is that the response was quite positive and overwhelmingly supportive. 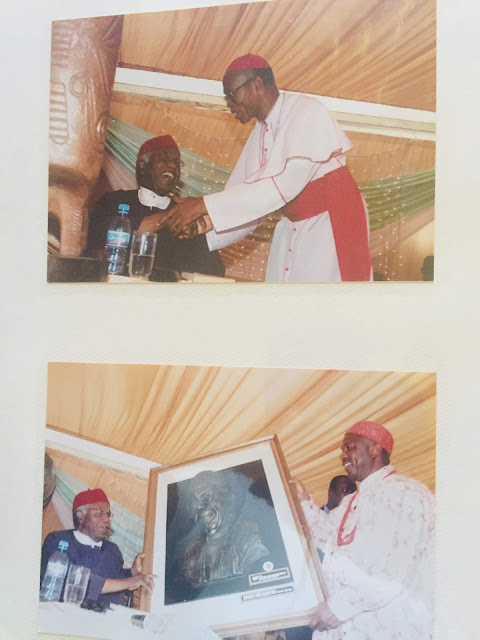 Earlier in this address, I made reference to 2009 when my administration brought the legendary Achebe to deliver that year's lecture and how much I still, as a person, relish the result of the efforts we made then. I had to send my deputy, Dr. Ada Okwuonu, to visit Achebe in the United States to personally extend our invitation to him. Ladies and gentlemen, the effort to bring today's lecturer was no less tasking. To bring Professor M.J.C. Echeruo all the way from the United States to deliver our 2019 Ahiajoku Lecture is perhaps even more rewarding, considering the fact that he gave the very first lecture of the series titled “AHAMEFULE: A MATTER OF IDENTITY,” exactly forty years ago, on Friday, November 30, 1979. Professor Echeruo's debut lecture set the high standard which the organizers of subsequent lectures, including the ones under my administration, have only been working hard to meet.

Let me quote from the remarks made by the late Mazi Ray Ofoegbu, then Imo State Commissioner for information, Culture, Youth and Sports, on Professor Echeruo's 1979 lecture: ''… a most scholarly and moving lecture without any hints to abstruse academics. He touched on quick cord of the audience and drew laughter, sighs, tears and applause as he pleased. Professor Echeruo's starting of Ahiajoku series has reassured the Imo State Government and all others concerned that the venture is well worth our while. We are grateful to Professor Echeruo and shall bring such lecturers that will keep the high standard of erudition and delivery which he has set''. 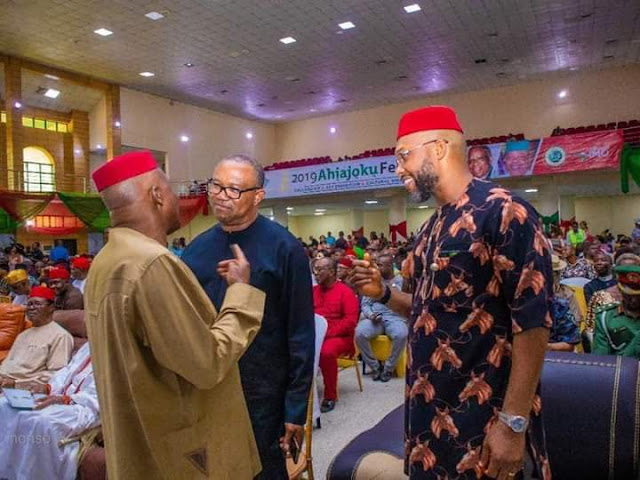 Forty years later, the government and people of Imo State still relish the above characterization of that event. Mr. Chairman, Your Excellencies, distinguished guests, ladies and gentlemen, please join me, therefore, in welcoming in a very special way, Professor Michael Joseph Chukwudalu Echeruo, to this very important occasion and to thank him for accepting to be with us today. I have no doubt in my mind that the audience is full of expectations to listen to this literary giant who, in spite of being an international scholar, is very much at home with his people.

Achebe told us in 2009 that ''the nose of the bulldog is slanted backwards so that he can continue to breathe without letting go''. In the same vein, I urge you all our governors and indeed all indigenes of former Eastern Nigeria not to give up in spite of the humongous Socio-Political challenges being thrown at us in our country, Nigeria.

Again, never and I repeat never expect any commensurate appreciation from our disenchanted and traumatized people. In 1982, for example, a young man in his twenties, presented a clear picture of what every leader must expect from our people when he warned the then Anambra state Governor to remember that ''the Igbo man whom you are governing is good at forgetting those good things his leader has done to him previously should the fellow fail to fulfill any current obligations''. 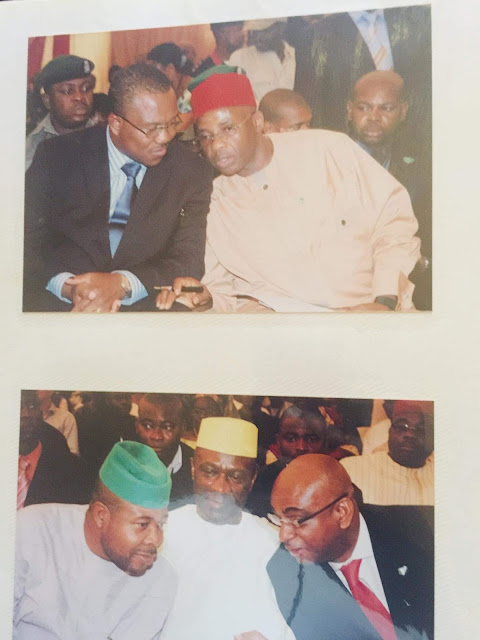 In conclusion, may I admonish that now is the time for us in the former Eastern Nigeria to pull together and re-channel our energies to create a major economic power for greater SocioCultural development. This we must do to progress. This is the vision of the Ahiajoku festival reloaded.

Once again, I welcome all our guests and pray God Almighty to guide us in our deliberations today and lead all of us safely back to our respective homes.

Thank you and God Bless Ndigbo and Nigeria!