US Democrats impeachment hearing is a political scam 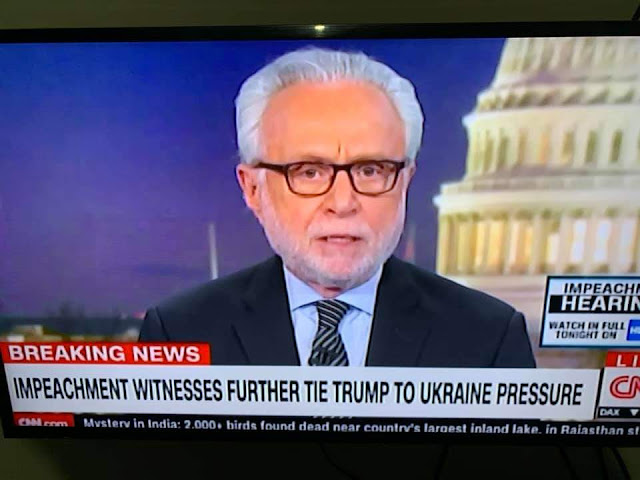 I watched the commencement of the so called impeachment hearing via obviously biased CNN and can’t believe that to CNN the high watermark for the day is merely a hearsay evidence.
Unbelievable political desperation!
A witness (Ambassador Taylor) said someone working for him told him he heard a conversation, during dinner, between someone sitting with him and President Trump and that’s what CNN is celebrating.
Even if it is confirmed Trump was at the other end of the line how do you explain that the cell phone was so loud that another person can clearly hear what the President said to another person? Are American cell phones different from the one I am typing with or was the call of the President answered on speaker phone?
Could it be that Pelosi and CNN do not understand the meaning of hearsay evidence? Why not subpoena the person who allegedly answered the call himself or at worse the “eavesdropper with world’s largest earlobes” instead of someone who heard what Mr Earlobes said he heard?
None of the so called star witnesses had direct contact with Trump and one couldn’t even remember who told him Trump tied the aid to investigation of Biden and his son. Another one even said he heard the President say no quid pro quo yet democrats are celebrating.
Na wa o.
Honestly the whole impeachment crap is nothing but witch-hunt politics and won’t go beyond the already planned “impeachment” at the House of Representative only. The senate won’t pass that bill and that will be the end for Democrats: they will lose 2020 election because of popular anger over the witch-hunt.
Sincerely, the analysts assembled by Democrats/CNN are sounding pathetic to me. Scripted choreographed analysis only.
Since Trump trashed Hillary Clinton in 2016 Democrats and their CNN have been screaming ‘impeach him impeach him’ up and down. They failed to find materials from Mueller’s witch-hunt enquiry and now have resorted to “someone told me he heard someone on the phone talking to someone he believes is Trump’.
Sickening politics everywhere!!!