Menu
Home » Celebrity gist » Osita Iheme (MFR) a.k.a Paw paw, gives back to the society through his foundation,

Osita Iheme (MFR) a.k.a Paw paw, gives back to the society through his foundation,

Comic actor, Osita Iheme popularly known as PawPaw, is in the news again. This time, the actor-turned-business merchant, through his initiative, Osita Iheme annual quiz competition, is set to empower the younger generation as part of his efforts to give back to the society.

Students of secondary schools in Imo State will again benefit from the actor’s foundation as plans have been concluded to hold his annual quiz competition on December 7th 2019 @Catol Owerri. 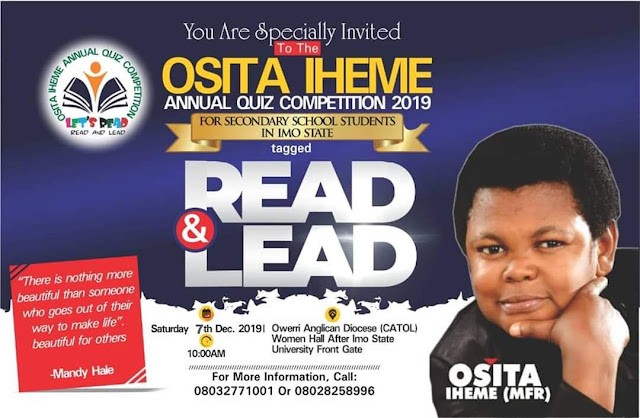 According to the actor, the idea was to contribute his quota to the growth of education in the state as well as to empower the younger generation through his foundation.

Speaking on the development of the initiative, Osita Iheme said that the competition had witnessed a massive growth as it had moved from the local government to state level, with more students participating.
Posted by IfeanyiCy Njoku
Labels: Celebrity gist