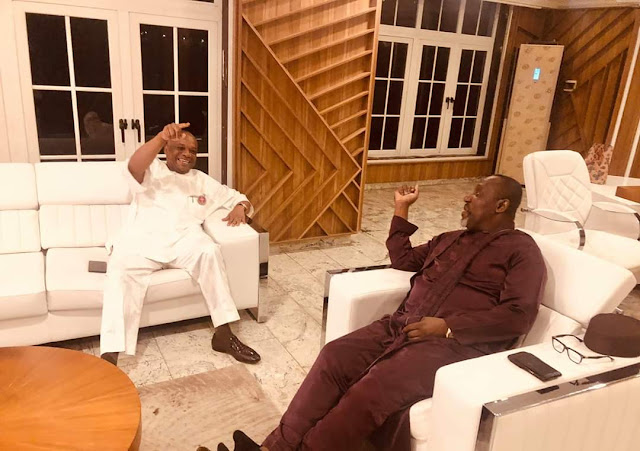 The Former Governor of Abia State, Chief Whip of the 9th Senate & Senator Representing Abia North Senatorial District in the National Assembly, His Excellency Senator Orji Uzor Kalu had paid an unscheduled visit to his brother and colleague in the Red Chamber, Senator Rochas Okorocha.
This is in a bid to further dramatize oneness of purpose, evoke unity as well as form synergy for the good of the people of the South Eastern Region and Nigeria in general.
The elated Senator received the principal officer of the senate in his Maitama building Abuja, Wednesday evening.Upon sighting his August visitor, Owelle cheered; ”My Chief Whip My Chief Whip,welcome my brother,where is thy Whip?”.And they both giggled ecstasy.
Recall,the Appeal Court reaffairmed the duo, Rochas Okorocha & Orji Kalu as Senators of Imo West & Abia North respectively,penultimate Friday.
Political pundits say the synergy has become pertinent for political growth of igbos in the country’s politicosphere and advancement of democracy.