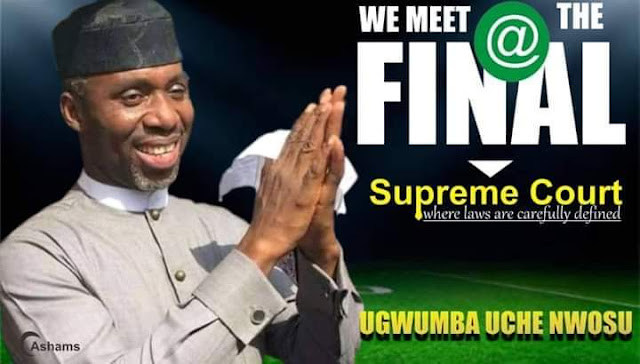 – Says Appeal Dismissed on mere Technicalities rather than on Merit

The Governorship candidate of the Action Alliance, AA, Ugwumba Uche Nwosu has reacted to the Governorship Election Petition Appeal Tribunal which struck out his case against the independent National Electoral Commission, INEC, declared winner of the March 9th, 2019 Imo Gubernatorial election.

The spokesperson of the Ugwumba Uche Nwosu Campaign Organization said "It is important to note that neither the Tribunal nor the Appeal Panel actually affirmed the election of Chief Emeka Ihedioha, rather, the panelists predicated their judgements on arguable technicalities.

Instead of determining the key Constitutional issue of two-third spread, the Tribunal rather ruled that the expert statistician presented as a witness by our legal team did not present any evidence to show that he is a qualified statistician."

He continued, "It is regrettable that instead of determining this sensitive issue of constitutionality, the eminent justices chose, in their unacceptable wisdom, to dwell more on the technicality of our expert witness' qualification or otherwise. We wish however to State, that the expert witness is not only qualified as an expert, but also possesses credible evidence to prove that.

His Excellency Ugwumba Uche Nwosu has directed his legal team to immediately file an appeal at the Supreme Court, where he is hopeful that the eminent priests and gatekeepers of our laws shall not discountenance this key  Constitutional loophole in the declaration of His Excellency Rt Hon Emeka Ihedioha as governor-elect."

"While Ihedioha may have gotten judgement in his favour this time, we are convinced that he will continue to be haunted by the illegality of the position he presently occupies. The wheels of justice may grind slowly, but its sanctity, we are confident, will eventually be preserved.

We urge all Imolites, especially, all conscientious progressives and supporters of His Excellency Ugwumba Uche Nwosu, to remain calm, law abiding and steadfast. The truth shall prevail at the end."