IPOB: Igbo Mornarchs Calls on United Nations to Prevail on Buhari to Let Nnamdi Kanu Return to Nigeria to Bury his Late Mother 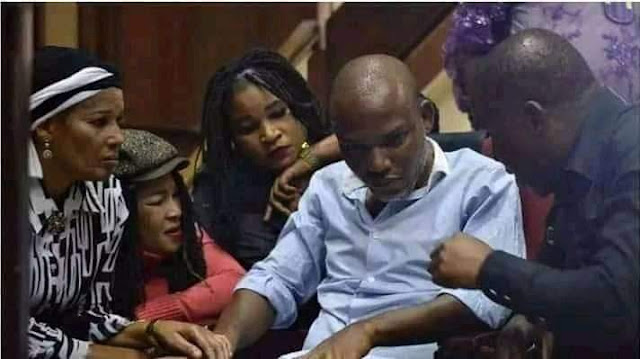 The traditional leaders also called on United Nation to prevail on the Federal Government of Nigeria.
IPOB leader, Nnamdi Kanu disappeared from Nigeria following alleged invasion of his residence in Abia state by soldiers in 2017.
Some monarchs in Orlu, Imo State have reportedly begged President Muhammadu Buhari to allow Nnamdi Kanu, leader of the Indigenous People of Biafra (IPOB), to come to Nigeria to bury his mother.
Kanu’s mother, Sally Kanu reportedly died in August in Germany after a protracted illness.
However, the IPOB leader has accused Nigerian Army of killing his mother, saying she died as a result of the shock from alleged invasion of his residence by soldiers in Abia State in September 2017.
Subsequently, Kanu disappeared as the Federal Government proscribed IPOB and also declared it as a terrorist group. Following the proscription, government also declared Kanu wanted.
Some royal fathers in South-East have, however, appealed to the Federal Government to let the IPOB leader return to Nigeria to bury his mother.
Speaking at Amakwo Event Centre in Orsu Local Government Area of Imo State, the monarchs led by HRM Eze Gideon Ejike said Kanu is their hero and he’s not a terrorist.
The leader of the monarchs, Ejike said, “Kanu is not a terrorist. Terrorists kill but we are yet to see any bloodshed by Kanu. He is our hero and should be allowed to bury his mother before the beginning of next year. He deserves the honour and right as the first son to bury his mother.”
The traditional leaders also urged United Nations to prevail on the Federal Government to let Kanu return to the country to bury his mother without molestation.