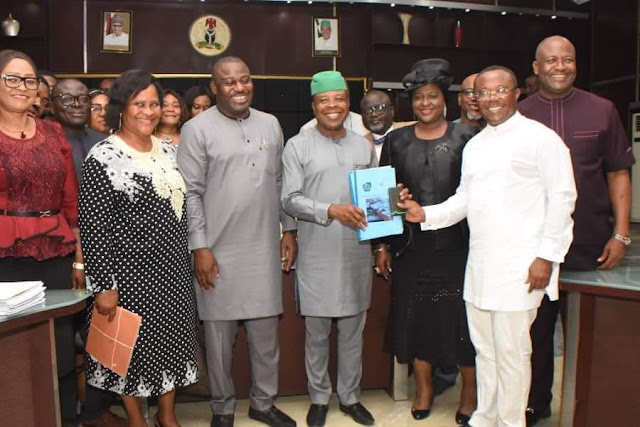 The entire people of Imo State, especially pensioners, have been jubilant following the fulfillment of the promise made by Imo State Governor, Rt. Hon.Emeka Ihedioha CON to ensuring commencement of payment of pensions to State and local government Pensioners.

The payment of arrears of pensions in the State came barely a week the governor had, at a Stakeholders Meeting on Pensions Matters at Imo Concorde hotel, Owerri, announced that payment will commence today, Thursday, October 17, 2019.

In a broadcast to the people of the State, Governor Ihedioha announced that the State government will be parting with N1, 218,175,387 for both State and Local government pensioners monthly.

He revealed that his administration inherited six years of pension arrears and discovered inexplicable discrepancies in the total number of pensioners in both the State and 27 local government areas.

He said, "I would like to appeal to all our citizens that the challenge of payment of  a pensions bills standing over N1.2 billion monthly is very enormous. This calls for sacrifices by all citizens..." 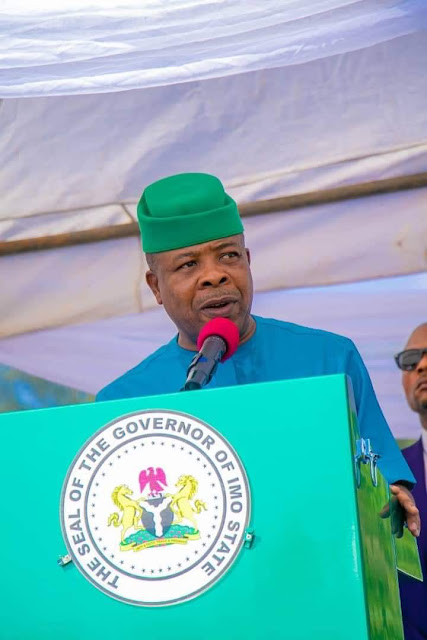 "We are confronted with the necessity to source for the revenue to ensure a good life for our senior citizens".

This is even as the Chairman of the Nigeria Union of Pensioners, Sir PU Ugochukwu has hailed Governor Ihedioha for keeping to his words to ensure pensioners are paid from today.

“I am overjoyed and that is the mood of my members across the state and local government. The governor has proved that he is a man that can be trusted when he makes a promise. We closely monitored the verification exercise and I can tell you that it was far-reaching and revealing. I expect that the payment will go round since they have commenced payment”, he said.

Governor Ihedioha recalled that on assumption of office, his administration embarked on a wide range of reforms geared towards achieving effective service delivery, ensuring value for money and entrenching transparency in governance, cumulative factors which led to the set up of an investigative committee to look into the process of pensioners in the State which was riddled with intractable problems and corruption.

He said, "One of such frameworks was the Imo State Pension Board and its corresponding pension management system which was afflicted with intractable problems and riddled with corruption. Sadly, we inherited six years of pension arrears and discovered inexplicable discrepancies in the total number of pensioners in both the State and the Twenty-Seven (27) Local Governments. We received complaints on various forms of irregularities in the scheme from various pension beneficiaries and stakeholders"

He recalled the challenges his administration confronted in handling the issue of pensioners in the State after years of neglect.

"When we made to resolve the contending issues, we were confronted with conflicting information from various offices in charge of pension administration. Consequently, we could not ascertain the proper position of monthly pension liabilities in the state" .

Governor Ihedioha said despite the challenges, he was determined to ensure senior citizens in the State enjoy their toil of yester years.

"As you all are aware, it has been my declared commitment to ensure that our senior citizens retire in joyful hope, live in dignity and extended the courtesy they deserve.  Accordingly, we set up an investigative committee to carry out a comprehensive audit of the pension administration system in the State. The main objectives of this action was to ascertain the actual number of pensioners in Imo State and to end the corruption and perennial cycle of verifications that have plagued the process over the years.

"The terms of reference of the Committee were, among other things:
a. To determine all outstanding pension liabilities in both the state and local governments;
b. To advise on the need for the establishment of an electronic database and digitization of the pension process in the state, and;
c. To provide the government with guidance on the desirability of transiting to the Contributory Pension Scheme (CPS) which have been established at the federal level as well as various states of the federation"

He said the State Executive Council took a close look at the report which revealed several challenges suffocating the pension system in the State.

"My good people of Imo State, I am pleased to inform you that the Committee has finished their work and on record time too. The State Executive Council has studied the report and the outcome satisfactorily deliberated upon and duly adopted. Their report, undeniably, confirmed our fears.

"Some of the challenges were a dearth of information due to the absence of a reliable database as well as irregular payments arising from flawed data. Most times, the data were hastily cobbled up from a plethora of committees and subsequently, carried conflicting information. As a result, the integrity of the available data was grossly compromised.

"There is also the issue of a failed attempt to establish an electronic database for pensioners through various consultants after so much financial commitment.

"Pursuant to their mandate, the Committee undertook the extraction and analysis of 48,481 records comprising 28,658 from the Office of the Head of Service (OHOS) of the State and 19,823 from the Local Government Pension Board.  After it had processed the records, the Committee finally verified 24,431 pensioners.  These were, subsequently, consolidated in a central server for the validation phase"

Governor Ihedioha said huge funds were saved for the State after the process of paying pensioners were reviewed and re examined.

"These involved cases of duplication and over payments engendered by wrong parameters, calculation errors or deliberate falsifications. There were instances in which Level 6 officers were earning pensions for Level 16.  Unfortunately, while the pensioners received pensions due them as retired Level 6 officers, the balance of the funds could not be accounted for.

"To carry through necessary processes, we have set up machinery for the quick commencement of payments. We are working with the banks to ensure prompt transmission of payments to the various pensioners. It would gladden you to know that the process also includes those who recently retired. Yes, indeed, as the months roll by, more people are hopping unto the retirement train. We are leveraging the Bank Verification Number (BVN) system as well as online real-time payment technology. This is to ensure that beneficiaries are easily authenticated and would get their payments at the click of the button, directly and not through proxies or surrogates"

Governor Ihedioha directed the creation of a Unit in the State Pension Board to capture those who were not part of the exercise.

"I am aware that a few but significant group of pensioners who are out of the state or in the Diaspora have not been captured because they could not be available during the exercise.

"However, I have directed that a Unit be created in the Pensions Board, to resolve these types of cases as well as complaints that may naturally arise during the audit exercise"

"My good people of Imo State, besides the huge financial savings achieved from this exercise, I am excited by the capacity we have built in the sector. Two Hundred and Fifty-Six (256) youths were recruited and trained from the 27 LGAs of the state on the use of bespoke software developed specifically for the exercise. There were also another Eight Hundred (800) adhoc staffs, all of them youths, who were trained in various skills and deployed in the process. The span of competence they have acquired include pension management, data analysis, document digitization and biometrics capture. Others include; digital hardware management and support systems. We look forward to harnessing these youths into other useful departments especially as government prepares to launch its e-governance platform. Some would also be redeployed to the Local Governments to help create an effective technology-driven pension data management system and the civil service biometrics capture exercise"

He also ordered the set up of a central database for pensioners in the State.

"Flowing from the adopted report of the Committee, government has directed the immediate establishment of a credible database of all pensioners. The digital architecture has been made inviolable so that the collated data would not be compromised in the future. Nobody would be able to add figures, nor remove.

Similarly, government is looking into the suggestion for the establishment of a Pension Board to manage the pensions of both the state and local governments. In line with prevailing National and International best practice, government will soon adopt the Contributory Pension Scheme – CPS. Our goal is to establish a seamless administration and management of pensions in Imo State, achieve accurate computation of benefits and build a secure data-bank. We also hope that the payroll structure would be integrated with the government e-payment system.

He appealed to "all our taxpaying adults and businesses to keep faith with our tax and revenue payments. “Taxes to whom taxes are due and revenues to whom revenues are due” are fundamental tenets enjoined by the scriptures. In the same vein, public servants charged with the responsibility of stewardship over public revenue would henceforth face a greater scrutiny"

He said his administration will introduce strict measures by instituting a regime of stricter revenue collection, accounting and monitoring

"To demonstrate our resolve, the present government upon inception adopted the Treasury Single Account (TSA) system to curb revenue leakage. We are also instituting a regime of stricter revenue collection, accounting and monitoring.  It is not going to be business as usual. “Indeed, the Labour of our Heroes past, shall never be in vain.”

"I would like to, therefore, express our profound gratitude to the members of the Committee and the team of consultants for the great job they have done. I am aware they rummaged through more than 48,000 files which were at various stages of decomposition and sometimes at grave risk to their health. Some of these files had gathered rot and rust more than four decades ago. Very importantly, I was highly impressed by their setting up of mobile teams that travelled round the states; to various nooks and crannies, including hospitals, to conduct verifications for pensioners hampered by various forms of ill-health or disabilities.

"Words would fail me to capture the debt of our gratitude. I urge you all to take pride in the fact that you were part of the great effort to resolve the perennial problems of pension administration in the State.

"The last eight years have been the locust years for the people of Imo State. The harm done to state institutions and processes were enormous. However, as a people endowed with abundant human and natural resources, we are equal to the task of the restoration project. Our mission is to re-establish the apparatus of good governance rebuild our infrastructure and restore trust in government. This calls for our collective hard work, prayers and partnership.