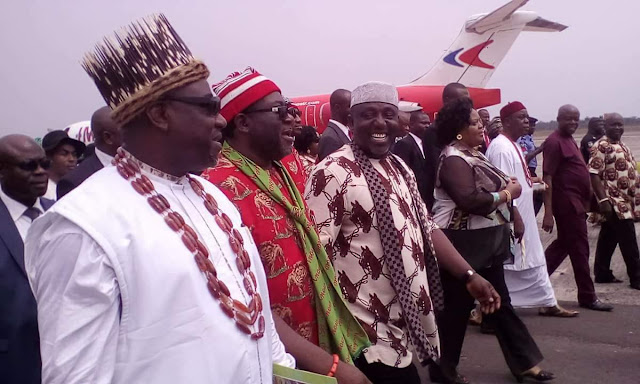 SUBJECT: HIS EXCELLENCY, CHIEF EMEKA IHEDIOHA’S BROADCAST ON PENSION, ON THURSDAY OCTOBER 17, 2019: THE IMO GOVERNOR WAS LIBERAL WITH BLACKMAIL & TIGHT – FISTED WITH FACTS.

On our part, the governor only decided to be liberal with blackmail and very tight-fisted with the facts or truth of what the Pension situation in the State has been.

In the broadcast, the governor announced that the payment of Pension for the months of August and September would begin on Thursday, October 17, 2019 (today), against the earlier repeated promise by his government that the Pensioners would be paid in arrears.

The governor in his broadcast said that after the biometric verification, the total number of Pensioners in the State came to 24,431 (Twenty-four Thousand, Four Hundred and Thirty-one Thousand), while the Pension bill for each month was reduced from N1.499b to N1.218b. The figure arrived at, after the verification done by Okorocha’s government was 25,124 Pensioners, which included the past governors, former deputy governors, retired Judges, retired Permanent Secretaries and so on, with the monthly Pension bill of N1.205b.

The government had also demanded a copy of the verification done by Okorocha’s administration. And a copy of it, dated June 12, 2019 was sent to the Principal Secretary to the governor by the Consultant. A copy of the letter is also attached.

The truth remains that if the current government had meant well, it would have inherited the more thorough verification Okorocha did with only N44m, whereas the government’s own verification cost it N515million.

In Okorocha’s first tenure, the Pensioners were receiving their pensions as at when due. That government began to have issues with Pension in its second term when the Pension bill sky – rocketed. The payment wasn’t regular again. But the former governor made a promise that he must clear the arrears before leaving office even if it was one month to his exit.

In fulfillment of that promise, Okorocha’s government kept N5.2billion in Access Bank for the payment of the Pension arrears. At the end of the last verification and for payment to begin, the PDP wrote Petitions to Enugu office of the EFCC, alleging that the money was not for Pension Payment as claimed, but for election. That was how and why EFCC seized that fund. This claim is verifiable either from EFCC or from Access Bank.

And with the governors’ Claim, there was no new verification because the figures he came up with were the same figures Okorocha worked on and reduced the whole thing. This government, to say the least, should not be taking Imo people for granted. And the governor should have also mentioned specifically when Okorocha stopped paying Pensions, instead of making bogus claims.

And even the two months the government said it would pay, the payment is not flowing. And the few Pensioners who have got alerts this afternoon were paid 70percent. The whole exercise is worrisome. The truth is that Imo people have begun to miss Okorocha’s government as we had earlier predicted.