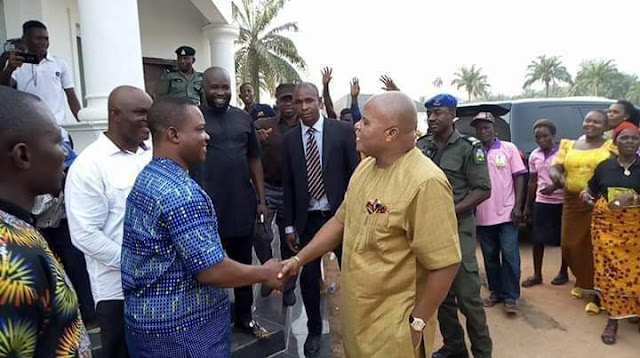 A press statement made available to Ifeanyicy.com and signed by Araraume’s Media Aide, Agu Diamond reads:
"IMO STATE GUBER ELECTION PETITIONS TRIBUNAL WEIRD JUDGEMENT: OUR STAND
_________________________
Agu Diamond
Governorship elections across the country were conducted on the 9th of March 2019. In line with the electoral act, Judges meant to preside over Election Petition Tribunal cases were sworn in, March 2019 and subsequently began sitting.
Penultimate Saturday,21st September  2019, the Governorship Election Petitions Tribunal which sat in Owerri since March, 2019, but later transferred her judgement to Jabi, Abuja, the Federal Capital, delivered a weird, untenable and unacceptable judgement on a petition brought before it by the governorship candidates  of the three major political parties nay the  All Progressives Grand Alliance, APGA,All Progressives Congress APC, and the last but not the least the Action Alliance.
The candidate of the All progressives Grand Alliance (APGA) Distinguished Senator Ifeanyi Araraume in a press statement in Abuja rejected in its entirety the kangaroo judgment as delivered  by the three man panel led by Justice U. Dogodanji.  The judgement which by all intents and purposes was unpopular before Imo people and Nigerians as a whole, was to say the least a ridicule on the esteemed Nigerian Judicial System. However, Senator Araraume who is an ardent believer in the rule of law still exhudes much confidence on the judiciary as the last hope of the common man. But, it is rather unfortunate that the Judges of the Tribunal  somewhat became  blind  from thoroughly examining the overwhelming evidences presented by our esteemed lawyers and the irrefutable testimonies of our witnesses including that of Araraume before arriving at its judgement.
It is a well known legal  fact that the issue of  25% of 2/3 spread is a constitutional matter but the panel unfortunately glossed over the issue of 2\3 spread which was a constitutional matter which the acclaimed winner did not meet, and was unable to disprove.
Also, the issue of fraud, over-voting and electoral violence  especially in the three LGA's of Aboh Mbaise, Ahiazu Mbaise and Ezinihitte Mbaise, which the legal team of Distinguished senator Ifeanyi Araraume meticulously presented with undeniable facts were unfortunately over looked. This is in addition to other issues with substantial preponderance of evidence put before the Justice U. Dogodanji.
To these end  Distinguished Senator Ifeanyi Araraume after due and diligent consultation with his legal team came to a conclusion and believe that the appellate court will  correct the aberration called judgment of the lower court, in line with the wishes of majority of IMO people in defence to  the mandate Imo people freely gave him. He has thus mandated the legal team to commence the appeal preceeding. Recall that the three man panel led by Justice Dogodanji dismissed in addition   petitions of senator hope uzodinma of the All progressives congress, Uche Nwosu of Action Alliance respectively.
Nonetheless Distinguished senator Ifeanyi Araraume remains grateful to party loyalists and millions of Imo people both home and in the diaspora, who have shown unflinching support, and assured them of his continued commitment, love, dedication to service and resolve to extricate Imo State from bad governance."